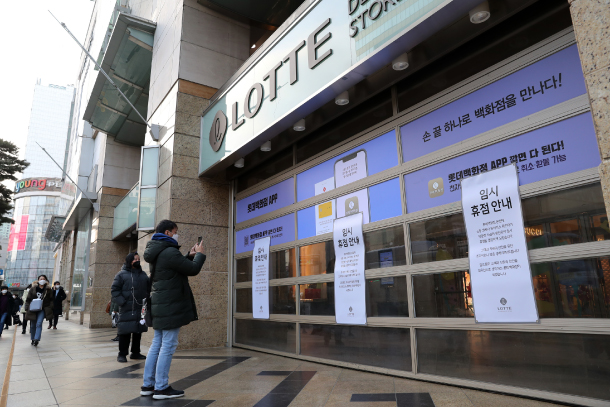 People walk by the closed Lotte Department Store in Myeong-dong, central Seoul. The retailer announced it would temporary close its flagship store for three days after Patient No. 23 was confirmed to have visited the store. [YONHAP]

Lotte Department Store’s main branch in central Seoul closed Friday afternoon after it was confirmed that a Chinese tourist from Wuhan who has come down with the coronavirus shopped there this month.

Lotte Duty Free, which is located in the same complex, closed as well. Both operations will reopen on Monday after being disinfected.

This is the first time Lotte, one of Korea’s largest department store operators, halted business because of illness-related issues.

“Through an official announcement from the Korea Centers for Disease Control and Prevention, we came to know that Patient No. 23 visited our main branch on Feb. 2,” the department store said in a Friday statement.

As soon as it was alerted, Lotte stopped customers from entering the building and evacuated both the department store and duty-free store from 2 p.m. All working staff was immediately sent home.

Lotte Duty Free was not visited by Patient No. 23, but a spokesman said the shutdown was decided on as a preventive measure.

Patient No. 23 is a 58-year-old Chinese tourist from Wuhan who entered Korea on Jan. 23. She was confirmed with the virus on Thursday. She visited Lotte Department Store’s main branch for roughly an hour on Feb. 2, a day before her symptoms surfaced.

Patient No. 23 also shopped in Emart’s branch in Gongdeok-dong, Mapo District in western Seoul, for two hours right after visiting Lotte. Emart closed the branch on Friday at 2 p.m. and is planning to disinfect it on Friday and Saturday. It hadn’t decided on a reopening date as of Friday afternoon.

Shinsegae and Hyundai department stores will also temporarily close on Monday for large-scale cleaning. All 12 Shinsegae Department Stores nationwide will be cleaned while Hyundai will clean 13 branches, excluding its branches in Apgujeong-dong, southern Seoul, and Mia-dong, northern Seoul.