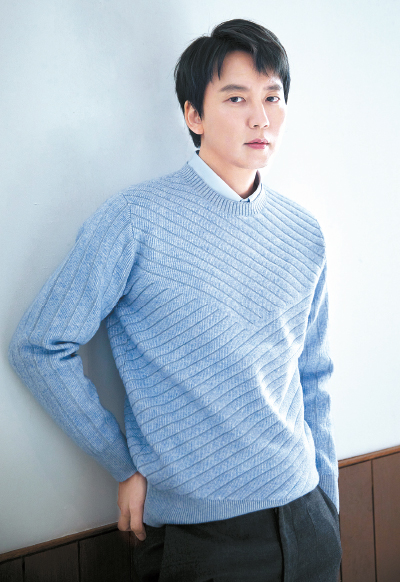 The exorcist that actor Kim Nam-gil plays in the occult film “The Closet” is a character that’s not usually seen in normal horror films.

“I wanted to depict Kyung-hoon [the exorcist] as realistically as possible,” the actor said in a recent interview at a cafe in Samcheong-dong, central Seoul. “I also wanted to introduce a unique character that wasn’t in previous occult films, a character that audiences can see comfortably and provides some room to breathe [in the otherwise tense atmosphere of the film].”

Kyung-hoon is an exorcist that Sang-won (played by Ha Jung-woo) enlists the help of to find his daughter, Ina, that ever-so-mysteriously went missing in his own home — which Kyung-hoon says is the work of an evil spirit who’s been kidnapping children for a decade.

Although he has the determination to pursue the same spirit for 10 years, Kyung-hoon is still a real guy — he watches the “Along with the Gods” movies, asks Sang-hyun to upload a review of his services on his blog and occasionally slacks off while he’s at work, even if he is dealing with an evil spirit.

There’s a cheery side and liveliness in Kyung-hoon that makes him almost cartoon-like. Kim says that may be because he created a lot of Kyung-hoon’s personality from characters in animated series and comic books.

“[Kyung-hoon’s] actions or responses might be considered funny in the audience’s eyes, but that wasn’t what I was trying to provoke,” the actor said. “I did get a lot of inspiration from comic books characters, but I also wanted him to feel real: No matter how serious the situation gets, he can’t be awake 24/7, and I didn’t think that endlessly looking for the ghost brought the tension [that the film needs]. 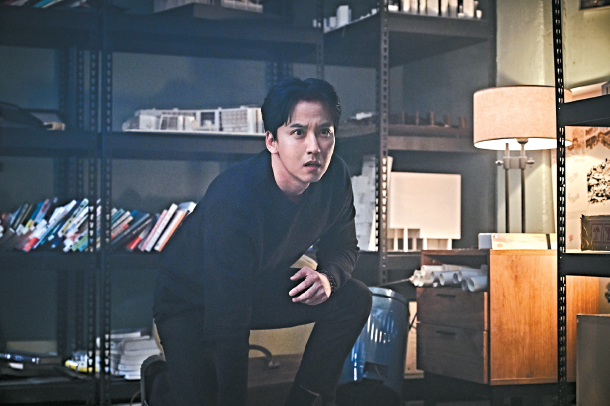 In “The Closet,” Kyung-hoon, played by actor Kim Nam-gil, works to try to draw out the evil spirit that took Sang-won’s daughter away. [CJ ENTERTAINMENT]

“For instance, he still eats and sleeps even though he’s on the watch for the ghost, because although the situation is dead serious, this is his work, something that he tackles everyday,” Kim said.

Before this film, Kim wasn’t a big fan of horror or occult films.

“I saw ‘The Omen’ [1976] without knowing that it was a horror film,” Kim confided. “Mind you, I still can’t stand in the middle of the elevator because of that.”

“Other actors told me that filming a horror film isn’t scary at all, and they were right,” Kim said. “We filmed it as if we were shooting a comedy film. I think [from now on] I will be able to see occult and horror films more comfortably knowing what elements or concepts were used.”

Another difference in the film which was emphasized throughout the press events is that the actors contributed a lot of their thoughts and ideas from the beginning of the production process.

“[Ha and I] revised the script together with the director, and from the start, we wanted the film not to be just scary, but also to be a drama that can people could sympathize with. Director Kim would share everything with us — from the casting [of child actors] and making the spells. I think the director made sure that the actors were comfortable about the overall tone, atmosphere, setting and concept of the film [instead of just being familiar with their characters]. In a way, [Ha and I] were like producers too.”

The actor also talked about his satisfaction in how the film came out.

“I liked that the film was short and concise,” he explained. “Not all films have to carry a meaningful message, but I still liked that [our film did]. Occult films usually have a gloomy, open ending, but in ‘The Closet,’ the story is complete; there is a tone of finality in it.”

Although “The Closet” is very much a horror story, as the narrative develops, it also probes into the sensitive social issue of child abuse when the duo finds out that the so-called “evil spirit” has a heartbreaking past — the spirit was once a little girl named Myung-jin who was killed by her father. Since then, the ghost has been taking children who want to get away from their homes, including Ina when Sang-won neglects her due to his busy work.

“The meaning of the word ‘child abuse’ has changed over generations to carry multiple meanings — hitting is not the only form of abuse that children receive anymore,” Kim said. “Our film isn’t the kind to assign fault or reprimand anyone, but we wanted to show and make the audience understand why Myung-jin did what she did.”

The actor is always up for a new challenge, but his fans like him best in romance flicks. In fact, Kim’s first big breakthrough was in the hit drama series “The Great Queen Seondeok” (2009) on MBC, in which he portrays the role of Bidam, the queen’s most trusted subject, who also happens to be romantically involved with her.

Kim says that he is always open to the genre, but also admitted that it’s been a long time since he saw “a true romantic romance” role that he wanted to portray.

“But I still think that there is a different romantic side of me that I could show to the public, a kind that ripens with age,” Kim said. “As for my counterpart, I don’t have a preference, but I want it to be someone who I can really talk to about acting, someone flexible and open.”