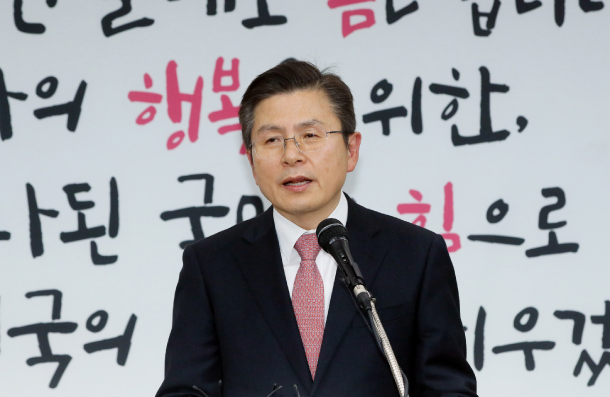 Hwang Kyo-ahn, chairman of the main opposition Liberty Korea Party, officially announces Friday at the party headquarters in Yeongdeungpo District, western Seoul, that he will run in the Jongno electoral district in the coming general elections in April. [YONHAP]

Chairman Hwang Kyo-ahn of the main opposition Liberty Korea Party (LKP) said Friday he will run in the Jongno District of Seoul in the general elections and face a formidable rival of the ruling Democratic Party (DP), former Prime Minister Lee Nak-yon.

Hwang held an urgent press conference at 3 p.m. at the party’s headquarters and announced his decision to run in Jongno in the April 15 general elections.

“I will make Jongno the main arena to judge the current administration,” Hwang said. “The public sentiments to judge the Moon Jae-in administration will spread from Jongno to other areas of Seoul, the capital region and rest of the country.”

The district, located in central Seoul, is known as the heart of Korea’s politics, as it produced three presidents. Presidents Yun Posun, Roh Moo-hyun and Lee Myung-bak all represented Jongno District during their lawmaker careers. Prime Minister Chung Sye-kyun is currently representing the constituency.

Hwang said he had delayed the press conference because he wanted to be careful as a party chairman overseeing the overall campaign strategy.

“Because negotiations to accomplish a conservative merger are ongoing, I thought it was inappropriate to announce my bid first,” he said.

“I already made a decision to surrender the chairman’s privilege of making nominations,” Hwang said. “There will be nothing I fear.”

With Hwang’s declaration, the race in Jongno will become a preview of the next presidential election.

In recent polls, the DP’s Lee and the LKP’s Hwang, both former prime ministers, have been ranked as the first and second, respectively, as the next president.

Hwang apparently held the press conference as pressure grew inside the party that he must not keep the voters waiting any longer.

Hwang said on Jan. 3 that he will run in a difficult district in the capital region but did not reveal which one.

Complaints have grown that his indecisiveness was affecting the entire nomination strategy of the party, and the nomination committee gave an ultimatum to Hwang on Thursday that he should make a choice by Monday.

The DP’s Lee welcomed Hwang’s decision. “I look forward to having a competition of good will for the sake of the future of Jongno and the country,” Lee said.

When Lee announced his bid last month, he said “I personally want to have a gentlemanly match [with Hwang].”