Patient No. 24 was on the airlift out of Wuhan

Patient No. 24 was on the airlift out of Wuhan 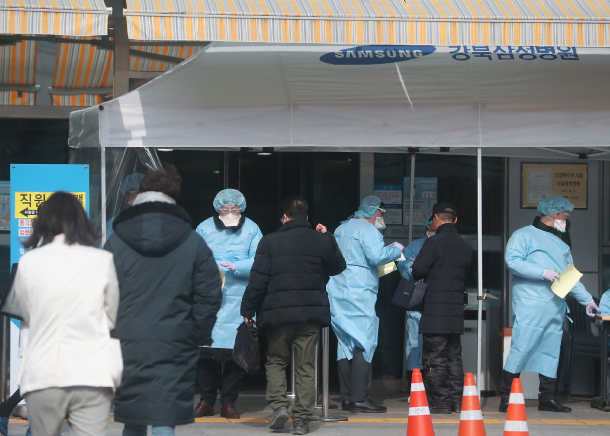 Workers at Kangbuk Samsung Hospital in Jongno District, central Seoul, receive visitors Friday. The hospital is among 46 private medical facilities across the nation that have been allowed to test people for the new coronavirus. Previously, only public health centers were allowed to run the test. [YONHAP]

Officials at the Korea Centers for Disease Control and Prevention (KCDC) said Patient No. 24, who had been quarantined at a public facility in Asan, South Chungcheong, was transferred to a government-designated hospital in Seoul for treatment Thursday night after reporting a sore throat.

Patient No. 24 was among 368 Korean nationals airlifted out of Wuhan, China, the epicenter of the outbreak, on a chartered flight on Jan. 30 to arrive at Gimpo International Airport in Gangseo District, western Seoul, the following day. He was sent to the Police Human Resources Development Institute in Asan for 14 days of quarantine, the incubation period of the coronavirus.

It’s the second time that a person evacuated from Wuhan developed the virus. Patient No. 13, also a 28-year-old man, was on the same plane as Patient No. 24 and later quarantined in Asan. He was diagnosed Feb. 2.

No one from the second chartered flight has been diagnosed so far. That last chartered flight from Wuhan brought 333 Korean nationals out of the Chinese city and touched down in Seoul on Feb. 1.

After their arrival here, the Wuhan returnees were divided into two groups, with one sent to the Asan facility and the other sent to the National Human Resources Development Institute in Jincheon County, North Chungcheong.

By Friday, the coronavirus had infected more than 31,520 people across the world and led to at least 638 deaths, almost all in China. In Korea, all but Patients No. 1 and No. 2 are being cared for at government-designated hospitals for isolated treatment, mostly in stable condition. Patient No. 2 was discharged from the hospital Wednesday and Patient No. 1 Thursday, both after full recoveries, KCDC officials said.

Seoul National University Hospital in Jongno District, central Seoul, said Friday that one among four patients receiving treatment there will likely be discharged “soon” as well. The hospital refused to identify which patient was about to leave, saying it was “personal information.”

As local health authorities scramble to curb the outbreak, many schools, restaurants and stores have temporarily shut this week upon hearing the news that infected patients roamed around their neighborhoods or visited their establishments.

The main branch of Lotte Department Store in Myeong-dong, central Seoul, was one of the latest places to close on Friday, saying it would reopen Monday after a major cleanup.

A Lotte spokesperson said the company was informed by the government that Patient No. 23 visited there last Sunday at around 12:40 p.m. to shop, a day before she began feeling symptoms of the virus.

Patient No. 23, a 57-year-old Chinese female from Wuhan, was diagnosed Thursday.

The Hello City apartment complex in Jamsil, Songpa District, southern Seoul, home to some 9,510 households, was thrown into mayhem Thursday after news broke that Patient No. 19, a 36-year-old Korean male, lived there. The apartment complex shut down its fitness center, sauna and table tennis room for a cleanup, and schools nearby closed.

The Ministry of Education announced Friday it would allow elementary, middle and high schools across the country to shorten their school year by up to 19 days due to the outbreak.

Under the Enforcement Decree of the Elementary and Secondary Education Act, schools must offer classes for at least 190 days per year but are allowed to declare recesses of up to 19 days when the government deems a disaster or emergency situation has taken place; education officials said the coronavirus outbreak fits that definition.

By Friday at 10 a.m., 592 schools across the nation were shut down to prevent the spread of the virus.

As Korea saw at least three patients apparently contract the disease in a foreign country other than China, the KCDC said Friday it would broaden the criteria of people eligible for a virus test. Starting from Friday, people who have returned from a country that’s been affected by the new coronavirus over the past 14 days and who are showing symptoms of the virus can ask to be tested.

Under the KCDC’s previous guidelines, a test was mostly allowed or required when the person had returned from China’s Hubei Province or was in close contact with an infected person.

The revision came in response to an intense public backlash this week after the head of a hospital in Gwangju told local media that he asked the government for a virus test on Patient No. 16, who had returned from a trip to Thailand, but was rejected because she hadn’t visited China. It later turned out the patient roamed around Gwangju and South Jeolla for 10 days after she first started feeling symptoms of the virus, stoking fears in the region of secondary and tertiary infections.

The KCDC said Friday that members of the public could visit one of 124 public community health centers or 46 private medical facilities in the country for health consultations and to check whether they’ve been infected by the virus. More information can be found at http://ncov.mohw.go.kr.

Health officials said it normally took six hours to reach a test result but that up to about a day could be required depending on the number of requests they receive.

The KCDC, however, warned that people who ask for a test simply because they live in the same neighborhood as infected patients or because they passed by areas those patients visited could be turned away.

“If the government wastes resources on people just because they feel jittery, then those who really need to be tested might lose their chance to seek treatment,” said a KCDC official.