For first time in years, Park wins at LPGA

For first time in years, Park wins at LPGA

After six years and seven months, Park Hee-young finally picked up win No. 3 on the LPGA Tour by defeating Choi Hye-jin in the fourth playoff hole at the ISPS Handa Vic Open at 13th Beach Golf Links in Victoria, Australia, on Sunday. 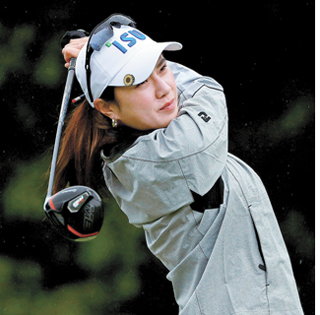 Park Hee-young picked up her third win on the LPGA Tour on Sunday. Her last win was in 2013. [LPGA]

With golfers battling in a strong wind, the leaderboard on the final day turned out to be a surprise. Despite the overnight leader Cho A-yean starting the tournament with a one-shot lead at 12 under par, once the final round ended, the leading score turned out to be eight under par, 281, tied between three Korean golfers - Park, Choi and Ryu So-yeon.

After finishing the first playoff with all birdies, it was Ryu getting eliminated first in the second playoff hole. Playing the par-5 18th once again, both Park and Choi managed to hit their second shots on the green, while Ryu hit hers into the greenside bunker.

Although Ryu hit an impressive bunker shot and left herself a possible birdie chance, she just missed her putt left of the hole cup to get eliminated from the sudden-death playoff.

Following Ryu’s exit, it was only Park and Choi. As both players failed to hit the green with their second shots, it came down to their chipping and putting.

But as they managed to make their up and down for birdies, the two players once again headed back to the 18th hole tee box, for the fourth time.

Unlike the past three playoff holes, Choi hit her tee shot too far right, and once again hit her drive to the spot where she needed to. Things only got worse for Choi.

She ended up hitting her second shot into the hazard, and due to this, Choi had to take a drop, with a one-shot penalty.

While Choi struggled, Park was well in shape for her a win, as she hit her shot just short of the green. Just as expected, Park ended up being the winner with a par on the fourth playoff hole.

With a win, Park became the first Korean golfer to win on the LPGA Tour in the 2020 season and took home $165,000 of prize money. It was also an impressive win for Park, as this is a great comeback for her from last season.

In 2019, Park finished 110th in the money ranking, so she had to earn her LPGA Tour card through the qualifying series.

At the time, she also won the tournament in a sudden-death playoff against Angela Stanford of the United States.

Park made her LPGA debut in 2008 by earning her Tour card at the 2007 LPGA qualifying school. Before she joined the LPGA Tour, Park played on the KLPGA Tour, just like the other Korean golfers, where she picked up six wins.

During her first season on the LPGA Tour, Park managed to retain her status card by making 22 cuts out of 28 tournaments she competed in. Despite the consistency, it wasn’t until the CME Group Titleholders in November 2011 that Park picked up her first win on the LPGA Tour.

Aside from Choi and Ryu finishing runners-up, overnight leader Cho was the next best finisher among Korean golfers as she finished the tournament tied for 16th, at three under-par, 286. Cho’s ranking dropped significantly as she shot nine over par, 81, on the final day.

The LPGA Tour will continue its season in Australia, as the golfers will compete at the ISPS Handa Women’s Australian Open, starting from Thursday through Feb. 16, at Royal Adelaide Golf Club in South Australia.