You Young grabbed silver in the ladies’ singles at the Four Continents Figure Skating Championships on Saturday, becoming the first Korean medalist at this annual event in 11 years. 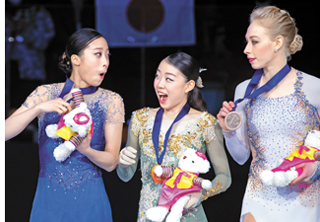 From left, You Young of Korea, Rika Kihira of Japan and Bradie Tenell of the United States pose for a photo with their medals after the ISU Four Continents Figure Skating Championships at Mokdong Ice Rink in western Seoul on Saturday. [YONHAP]

You earned her personal-best 149.68 points in the free skate at Mokdong Ice Rink in western Seoul for an overall score of 223.23. You had been in third place after Thursday’s short program, with 73.55 points.

Rika Kihira of Japan won the gold medal with 232.34 points overall, after leading everyone in the free skate with 151.16 points. Bradie Tennell of the United States took the bronze medal with 222.97 points.

The Four Continents began in 1999 for skaters from Asia, Africa, Oceania and the Americas. Before You’s breakthrough, Kim Yuna, the 2009 ladies’ singles champion, had been the only Four Continents medalist from Korea.

For You, Kim Yuna was the reason she started figure skating. She was living in Singapore in 2010 when she saw Kim win the gold medal at the Vancouver Winter Olympics.

Until 2012, You trained by herself in Singapore, but the tropical climate made conditions less than ideal. She had to practice in public rinks and taught herself techniques by watching videos of Mao Asada and Kim because there were no professional figure skating coaches in Singapore. You’s mother brought her to Korea in 2013.

When Yoo arrived in Korea, she started training at the Gwacheon Ice Skating Rink, where her heroine Kim trained when she was little. Although she had a difficult time with Korean, she was more passionate than anyone else when it came to figure skating. After spending a majority of her time training, You, within a year, mastered the triple jump, and in 2015, she became the youngest athlete to be chosen for the national team, at age 10.

In 2016, she broke another record, becoming the youngest figure skater to win the Korea Figure Skating Championship, beating Kim’s by 10 months.

You, 15, is now in her first senior season. After winning medals at three lower-tier events early in the season, You captured bronze at the Skate Canada in October, one of six competitions in the International Skating Union (ISU) Grand Prix series.

You opened her free skate with a clean triple axel - she and Kihira were the only two who even attempted the jump at this competition - and pulled off a triple lutz-triple toe loop combination. You’s only blemish was with her triple flip toward the end of the program, when she was docked 0.35 points in grade of execution for under-rotation.