After 50 years, Lee Jang-hee’s career is just getting started: The singer-songwriter will celebrate his anniversary with a big concert in March

After 50 years, Lee Jang-hee’s career is just getting started: The singer-songwriter will celebrate his anniversary with a big concert in March 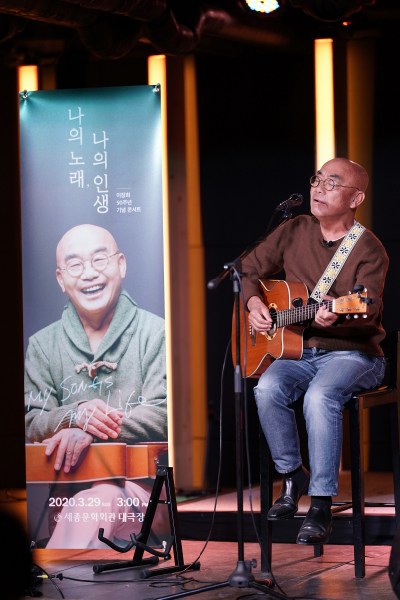 Singer-songwriter Lee Jang-hee sings during a press conference held in Jongno District, central Seoul, on Jan. 30, ahead of his 50th anniversary concert slated for March. [PRM]

Singer-songwriter Lee Jang-hee arrived at a press conference held at Emu Artspace, located in Jongno District, central Seoul, late last month to mark the 50th anniversary of his debut ahead of his upcoming “My Songs, My Life” concert.

“I’m feeling quite overwhelmed today,” said Lee. “It’s already been 50 years since my debut. That number is no different from 49 or 51, but I feel special about it. I still live in music. I listen to music for at least three hours a day,” Lee added.

Clad in jeans and a black leather jacket, the 73-year-old singer was asked to sing one of his hit songs by a journalist in attendance, a fairly unusual request at a press conference.

It was a spontaneous request, but the singer willingly accepted it, saying “I will sing it without a microphone” and began to sing “I Will Give Everything to You” with his clear and resonant voice.

The song was featured in the 1974 hit film “Heavenly Homecoming to Stars.”

When the song was released, Lee was in his 20s with shaggy hair. Decades have passed since then, but the septuagenarian singer still has that young man inside him when he’s singing that song.

Lee was an ordinary college student who grew up listening to pop music until he met famous radio producer and D.J. Lee Jong-hwan.

The radio producer and D.J. saw a talent for singing and writing music from Lee and recommended him to pursue a career in music. Lee, who was studying biology at Yonsei University, dropped out right away and debuted as a singer in 1971.

Lee was one of the folk musicians who frequently performed at C’est Si Bon, the now-defunct popular music lounge located in Mugyo-dong, central Seoul.

During that time, the singer wrote a number of hit songs including “It’s You,” “A Winter Story” and “Memories of a Shot.”

The singer’s “It’s You” was banned in 1975 under the Park Chung Hee regime for lyrics that were deemed inappropriate, and a year later, he was imprisoned for smoking marijuana.

His career came to a halt. Lee eventually left for the United States in 1989 and ran his own radio station in Los Angeles for Koreans living in the area.

“I know I was almost forgotten by the public after the 1970s. I did many different things in the states and [flew back to Korea] after retiring and settled down at Ulleung Island but I returned to the music scene by chance,” said Lee.

Lee released a single titled “Ulleung Island Is My Heaven” in 2011 and resumed his singing career.

“I could release that album after 35 years [of downtime]. I feel like I’m at the height of my career now.”

By looking back on the past, Lee continued, “I never regretted doing music. My heart ached when I saw my mom crying because I didn’t study and dropped out of college. But I have no regrets about the decision I made. I think only music can captivate the hearts of hundreds and thousands of people at a time.”

When asked what makes his songs still timeless classics, he said “lyrics.”

“I still don’t know how to read musical notes. But it takes me days to write words. Melodies come naturally after [I finish writing the lyrics.] I try to catch small things people feel in their everyday life and write them into lyrics.”

Lee talked about his upcoming concert, too.

“I want to express the things I feel inside my mind [through music]. I’m over 70, and I want to sing about my loneliness, emptiness and a calm state of my mind.”

The singer kept stressing that he thinks he is at the peak of his career.

“One of my friends passed away while I lost contact with another, but I find myself happy when I sing with them at a theater in Ulleung Island.

“I want to wrap up my life so far through the concert. You can have a look at my turbulent life through the stage, too.”

The concert will be held on March 29 at the Grand Theater at Sejong Center for the Performing Arts, located in Gwanghwamun, central Seoul.