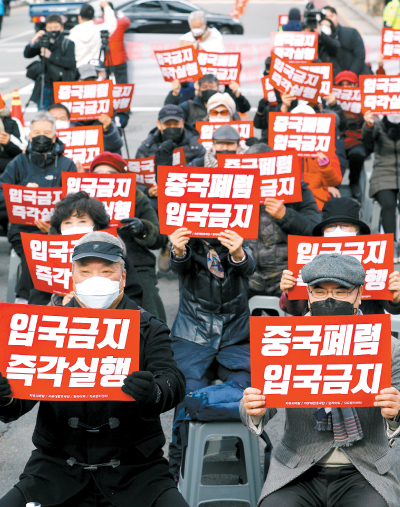 Right-wing groups hold a protest near the Blue House, central Seoul, demanding the “prohibition of Chinese entry” on Jan. 29. [NEWS1]

Ewha Womans University, a popular spot for many Chinese tourists, no longer has its main gate wide open for anyone to walk in. Instead, security guards stand outside and stop tourists from entering the school. For the first time in many years, the campus is unusually quiet and peaceful.

As the outbreak of the coronavirus continues to rapidly spread throughout China, and as the number of confirmed cases in Korea increases day by day, fear has spread and anti-Chinese sentiment, or sinophobia, can be seen and felt across the nation.

One example of how quickly sinophobia has spread is a petition that appeared on the Blue House website on Jan. 23, demanding the government ban the entry of Chinese nationals altogether. Over 680,000 people have signed the petition so far.

Some are refusing to stay behind the safety of a computer screen and are taking their displeasure to the streets. At Gwanghwamun Square, where rallies are held almost daily, some protesters have emerged wearing their masks and holding up posters that read “Ban Chinese Entry.”

While some argue that restricting Chinese entry is a reasonable and necessary measure that should be enforced, others say that such public resentment against China is a form of xenophobia and discrimination that won’t resolve the ongoing outbreak.

The distinction between taking precautions, racial discrimination and xenophobia is becoming more muddled as the outbreak continues to get worse.

According to Yoon Kim Ji-young, a professor at the Institute of Body and Culture at Konkuk University, discrimination is the institutional outcome of xenophobia, the fear of an outside culture or nationality. She says that the current strain of anti-Chinese sentiment is an example of emotional antipathy towards a specific community.

In that sense, Yoon Kim classifies the Blue House petition and street protests to restrict Chinese from entering Korea as xenophobic.

“To be more specific, the petition is somewhere halfway between xenophobia and discrimination,” Yoon Kim said. “The public is asking the government to institutionalize the sinophobia [through the petition], which would then become a form of racial discrimination [if it gets realized].”

The professor evaluates that the public fear of facing an unknown, invisible epidemic is edging towards targeting a visible ethnic group.

“To prevent the public fear from turning into xenophobia, it is absolutely crucial that health organizations and related experts such as the Korea Center for Disease Control and Prevention [KCDC] and World Health Organization [WHO] provide a platform where correct information about the virus can be shared instantly - how the pandemic is being maintained and various safety measures that people can carry out in their everyday lives,” she said.

The professor pointed out that the creation of a coronavirus map (https://coronamap.site/) should have been the responsibility of the KCDC. The map immediately updates information about each patients’ respective routes through different colored lines based on the KCDC data. Although the same data can be searched through the organization’s website, the map is much more convenient for people to trace the patients’ footsteps.

Surprisingly however, the creator of the map turned out to be a college student named Lee Dong-hoon, a senior from Kyunghee University’s Department of Industrial and Management Systems Engineering. Lee uploaded the map’s link on Facebook on Jan. 30.

“I made this rather hurriedly, so the code and user interface may still be messed up, but I hope that the map still helps,” Lee wrote on his page. “I heard that washing your hands and wearing masks really helps to prevent the spread of the virus. Please take care, everyone.” 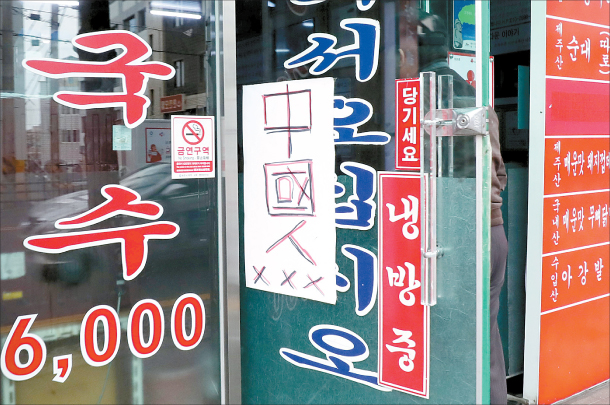 A sign banning Chinese visitors is written in Chinese and placed on the door of a popular restaurant among tourists in Jeju. [NEWS1]

Some countries, such as the United States, Russia and Australia, are denying the entry of all foreign visitors who have been to China in the past two weeks. The public pressure for the Korean government to do the same is growing heavier than ever, but Hanson Park, a neuroanthropologist and a lecturer in the Department of Anthropology of Seoul National University, says that at this point, barricading the national borders will not be effective in preventing further spread of the virus.

“Prohibiting Chinese from entering the country or avoiding them won’t help in impeding the virus outbreak,” Park said. “It’s understandable that people might think it would make them safer, but with the basic reproduction number [R0] of the infection already having gone over 1, it’s realistically improbable to say that such restrictions would be effective.”

R0, an epidemiologic metric, is the average number of secondary infections from an infectee in a completely susceptible population. A WHO report puts the range of the novel coronavirus’s R0 to between 1.4 and 2.5.

To back up his argument, Park referred to a simulation called “Event 201” conducted by Johns Hopkins University with a fictional coronavirus - which, in this case, derived from pigs in Brazil that spread to farmers - in October 2019.

“They set the R0 at about 1.7, and even then infectivity was too high for border prohibition or traveling limitations to halt the pandemic,” Park said. “So actually, banning Chinese entry is more of a political matter to lower social unrest rather than for the sake of public health. Social instability can bring about a ripple effect across the country’s economy, society and culture. [Some countries might have] chosen to bar Chinese to minimize the negative impact of this public unrest.”

According to Park, WHO has yet to have announced traveling restrictions.

“In medical terms, this is what’s right,” Park said. “Even if people may feel uneasy.”

Korea is not the only country with xenophobia. Across the globe, Asians are facing racism more than ever since the virus outbreak.

Objections arose from French Asians when local newspaper Le Courrier Picard used the racist headline “Alerte jaune” (Yellow Alert) set atop with a photo of an Asian woman wearing a mask. When complaints arose, the paper quickly apologized, but it didn’t help decrease the anger from Asian residents.

Professor Yoon Kim also uploaded a post to her Facebook showing concern for the racism through sharing her experience.

“I’ve picked up a weird habit from the severe acute respiratory syndrome, or SARS epidemic in 2003: Whenever I touch a doorknob or press an elevator button, I don’t use my hands. Instead, I use a tissue [to touch something], or at least carry hand sanitizer to be used instantly after.”

When SARS hit the world, the professor was studying in France and experienced racism herself. Not only would no one sit next to her on public transportations, but cold stares would follow her on the streets.

“Antipathy doesn’t appear out of thin air,” Hong Sung-soo, professor of law at Sookmyung Women’s University, noted. “For instance, if it was a community with a good impression, others won’t immediately blame the group for having suspicions to have caused the virus. [For xenophobia to spread,] it has to be a group that people already had negative feelings or stereotypes about. And when it becomes highly likely that this group has spread the disease, the [xenophobia] spreads quickly. If it were Americans, for example, the antipathy wouldn’t have escalated so high, so quickly.”

“I guess the worst part is the disgusted and fearful stares I get lately,” Araya Muangkhunrong, a German and Thai dual national, said.

“People here have this strong imagery that all Asians are Chinese,” said Korean Jeong Choong-in, who currently resides in England. Jeong said that while he’s been staying in the country for six months, he’s experienced minor instances of racism, such as people yelling in his ear and then running away, or a group mimicking a monkey in front of him.

“A recent instance of racism that I experienced was when an Englishman said ‘Yo, Virus’ to my face.”

“In the West, all East Asians are grouped together in the same category, as the non-Westerners,” Yoon Kim said. “We [Koreans] might think that we would only need to restrict Chinese, that we are a completely and entirely different [race,] but it’s all the same from their [the West’s] eyes.

“Racial discrimination against Asians doesn’t even reach the surface of the social issue in European countries. Discrimination against people of Arab or African ancestry is [at least] considered problematic, recognized as a social malaise that they need to resolve, but in countries such as France, the Asian community itself is so small that they don’t even perceive the fact that Asian racism exists. The virus is actually spotlighting Asian racism that western society didn’t even know was there.”

Yuena Li, a Chinese American living in the United States, uploaded an Instagram post saying “Coronavirus isn’t an excuse to be racist.”

“There’s always been racism here. It’s never a shock, but it doesn’t make it O.K.,” Li said. “It’s also sad that Asians are being racist toward the Chinese as well. They don’t understand non-Asians are not going to see any of us different.”

“One other thing I would say is that it seems like they [Westerners] are targeting people that are wearing masks,” she said. “But they don’t understand when someone wears a mask, it doesn’t mean they’re sick - they’re trying to protect themselves and other people around them. I want to normalize [people wearing] masks so no one gets targeted.”