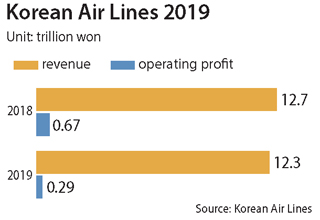 The weak performances are the result of the drop in demand as a result of various global issues, including the U.S.-China trade conflict, the Korea-Japan conflict and Hong Kong protests. Cargo businesses of the carriers were hit by the slowing of the global economy.

Increases in the minimum wage in Korea and the strengthening of the won also affected results in the airline industry.

Korean Air Lines announced plans to sell non-core assets to improve its financial structure on Thursday. The assets include the ownership of the operator of the Wangsan Marina Resort in Incheon and a large plot of land in Songhyeon-dong in Jongno District, central Seoul.

Jin Air, another domestic low-cost carrier, reported a net loss of 54 billion won and an operating loss of 49.1 billion won last year, the company said Monday. The business turned to a loss from an operating profit of 63 billion won in 2018.

Domestic airlines that have not yet reported are also expected to record losses.

Weakness in the business is expected to continue given the global coronavirus outbreak.