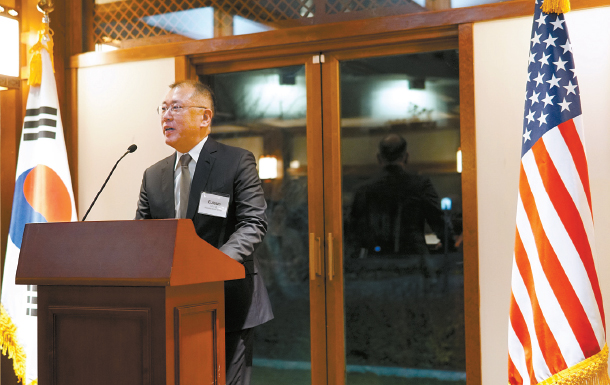 Hyundai Motor Group continued its campaign for a hydrogen-based future as its top executive took the stage last week in the United States to introduce the automaker group’s developing technologies and strategies for eco-friendly mobility.

It was the Korean Embassy’s first time hosting an NGA summit.

Chung showcased how the Nexo hydrogen fuel-cell electric vehicle can purify air with its three-stage system, and mentioned the possibility of expanding supplies of Hyundai Motor’s fuel cells in the U.S. market.

In September, the automaker signed an agreement with American manufacturing company Cummins to jointly develop and commercialize electric and fuel-cell powertrains.

Chung has been frequently appearing in public to advocate for the company’s hydrogen initiatives and new mobility technologies. Those two projects are at the center of Hyundai Motor Group’s plan to invest 100 trillion won ($83.9 billion) over the next five years.

Chung also spoke at the Hydrogen Council’s annual meeting in Paris to argue for more cost cutting to expand the use of renewable energy sources.