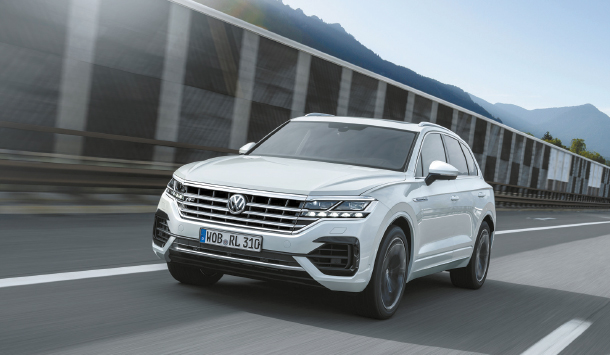 The third-generation Touareg launched in Korea last week is driven down the road. The luxury SUV from Volkswagen is priced between 88.9 million won (＄75,000) and 100.9 million won. [AUDI VOLKSWAGEN KOREA]

GAPYEONG, Gyeonggi - The 2016 diesel emissions scandal cost Volkswagen a lot, not just in terms of fines but also sales.

Now it is staging its comeback.

The company’s Korean unit was barred from selling cars in the country that year and only was authorized to resume business in 2018. Supply shortages and certification delays held back sales last year.

The April 2019 total was precisely zero.

But in recent months, signs of life are more than apparent. Its flagship Arteon sedan ranked as the most sold car last month, taking Volkswagen to the No. 3 spot for imports.

To maintain the momentum, Audi Volkswagen Korea introduced the third-generation Touareg SUV to the market last week. It is set to compete against the Genesis GV80 and the face-lifted Land Rover Discovery Sport, both of which launched early this year.

It seems Volkswagen made the right call in terms of product choice. The new Touareg seems to have hit the sweet spot of stable on-the-road performance, convenience and practicality. It is a vehicle that might be valued by families looking for a luxury option.

The large-size German SUV first introduced in 2002 has been one of the most popular models for Volkswagen over the years, recording more than 1 million sales to date globally.

But the high price could scare away some potential customers. It all comes down to whether the new Touareg is really worth between 88.9 million won ($75,000) and 100.9 million won, even though it may be the cheapest option among German luxury SUVs out on the market.

Some common Volkswagen themes are evident.

Horizontal metallic lines run across the front and seamlessly connect sharp rectangular LED headlamps and a radiator grille into a single design.

When talking it up, Audi Volkswagen Korea Executive Director Stefan Krapp mentioned luxury countless times. I am not sure I got that sense exactly. The car looks a little too bulky at the front.

To be clear, the German diesel-powered SUV is luxury, but as opposed to sporty. Acceleration felt a little delayed on the 3.0 TDI Prestige model.

But after an hour, I got to better understand the machine and started to understand that it would be tough to match the level of comfort, stability and prowess offered by Touareg’s 3.0-liter V6 turbo diesel engine.

The test drive was as good as it is for any diesel car in terms of velocity and acceleration. Driving over speed bumps felt like walking over a stack of pillows, and the all-wheel steering system - found in some Lamborghini, Porsche and Bentley models - made speeding around sharp corners easy.

Sports mode brought some tightness to the steering and a little improvement to acceleration, but there was little noticeable difference from the comfort mode. There were some off-road driving modes available, but there never was a chance to test them.

The adaptive cruise control was excellent, as it helped Touareg identify cars in front and make necessary adjustments. For about 15 minutes when I felt too lazy to hit the gas, the car maintained a safe distance from others on the highway.

But as there weren’t that many cars on the road in the first place, I never could test out the Traffic Jam Assist feature, which only works when traveling under 60 kilometers (37 miles) per hour.

Audi Volkswagen Korea said it is also bringing in a new 4.0-liter V8 diesel engine for two limited-edition versions in the second quarter. Maybe it could be worth the wait considering how much the 3.0-liter engine already delivers.

The “ergoComfort” system allows the front seats to be adjusted to 18 different positions. I found the perfect driving position only seconds after messing with the control buttons. I never had to shift my body during the drive.

Although the back seats didn’t have that same feature, they also felt comfortable enough for drivers to fit in their families. The SUV was roomy as a whole, and the 810-liter trunk space is probably large enough for any reasonable load.

The interior looked superb at first glance. A seamlessly connected 12.3-inch display “Innovision Cockpit” dashboard, and the 15-inch touchscreen display infotainment system made me feel like I was stepping inside a car of the future.

That said, the leather seats felt a little old school, and the interior didn’t have the same lines I have seen in other cars in the similar price range. The GV80 and the Mercedes-Benz GLC are two examples.

I also started to feel my usual frustration with imported cars kicking in.

I am often surprised by the infotainment systems in imports, and this vehicle was no exception.

The 15-inch screen was humongous, big enough to display everything any driver might want to see, but the display was the end of the positive vibe I felt.

It took a while for me to get used to controlling the air-conditioner, seat temperature and ventilation via a single touchscreen. What happened to good old buttons and dials that did everything I wanted without having to think?

While Volkswagen offers Google Maps with Touaregs sold in other countries to show nearby objects and roads in 3-D, more basic visuals are offered in the third-generation Touaregs marketed in Korea.

Tracking vehicle movements and delivering directions to drivers were also significantly delayed, which prompted me to make a stop at one point to connect my smartphone for Android Auto.

As is the case for many other Volkswagen models, the third-generation Touareg delivers everything people expect from the German automaker in terms of performance. And even though I may not be the fan of Volkswagen’s design philosophy, many consumers dig that concept, which also could work favorably in the Korean market.

Yet while the interior was modern, even futuristic, the counterintuitive infotainment system and Volkswagen’s move to shove every control feature into a single display didn’t seem to click.