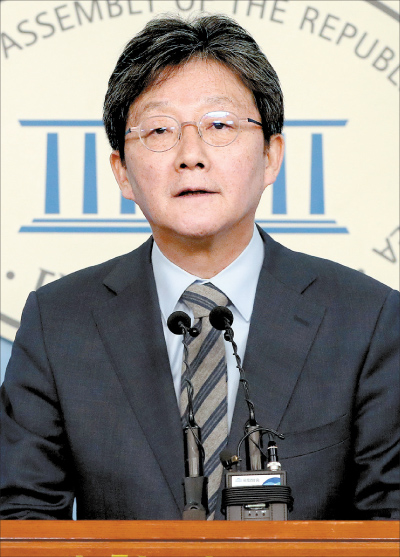 Rep. Yoo Seong-min, de facto boss of the New Conservative Party (NCP), on Sunday announced he would accept a merger with the main opposition Liberty Korea Party (LKP) into a single party ahead of the April general elections.

During a press conference at the National Assembly, Yoo also said he would not stand for reelection in his constituency in Daegu this year, so that he could focus his efforts on realizing the merger and prove to the people the sincerity of his drive to build a reformist conservative party out of the union.

Restating the conditions of the consolidation, Yoo stressed the merger could only be possible if it was not a unilateral absorption of the 8-seat NCP by the 107-seat LKP but rather a process to build a new party altogether.

“The conservatives cannot earn the people’s hearts with simply just a union,” Yoo said, urging the new party to select candidates for the legislative elections independently from factional loyalties.

This means the LKP must agree to the three principles he outlined earlier - adopting a reformist agenda, building a new party and acknowledging the legitimacy of former President Park Geun-hye’s impeachment and removal from office.

Since last month, the two parties have entered a series of negotiations to unite Korea’s fractured conservative landscape and form a single entity strong enough to challenge the liberal Moon Jae-in administration and the ruling Democratic Party in April’s races.

For Yoo and his colleagues in the NCP, who were branded as turncoats after voting in favor of the impeachment of Park in a massive corruption scandal in 2016, mending the schism has been contingent on the LKP’s willingness to accept their objections against Park.

Sunday’s announcement may signify the end of a wayward journey for Yoo’s political faction outside the LKP. The faction has assumed three different names in a series of political experiments that all ended in disappointment.

Some analysts say that in spite of Yoo’s insistence that a merger with the LKP is a union of equals meant to build a new entity, the move effectively signals the reemergence of the pre-schism Saenuri Party, with little changed in its composition since the last legislative elections.

The LKP on Sunday welcomed Yoo’s announcement, with its Chairman Hwang Kyo-ahn calling it a “difficult and precious decision for the sake of unity within the right wing.”

Even hardliners within the LKP who had been critical of Yoo, like Rep. Kim Jin-tae, said the move was an important step towards building a single conservative front in the general elections.

The LKP, NCP and two other minor parties are set to discuss the terms of a grand conservative merger under a committee that is set to hold its first meeting this week.

The name and logo for the new party are likely to be decided at this meeting.

While running under a single banner is likely to work towards the advantage of conservatives by consolidating their vote share in district races, the question of distributing nominations - a perennial point of contention for all political parties in Korea near election time - could challenge unity throughout the merger process.