After giving up on sport, Joo wants to medal

After giving up on sport, Joo wants to medal 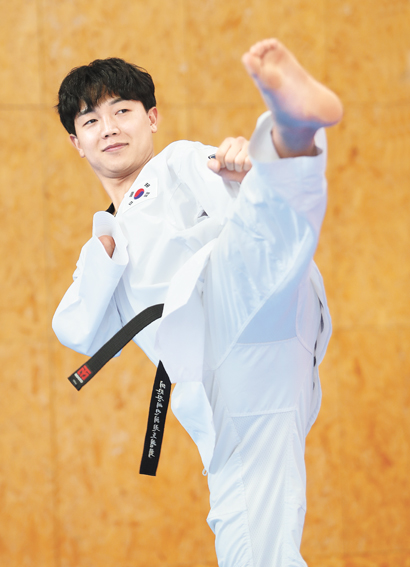 Para taekwondo practitioner Joo Jeong-hun hopes to become the first Korean to medal at the 2020 Tokyo Paralympics as the sport will be newly added to the Paralympic Games. [KOREA PARALYMPIC COMMITTEE]

In Korean sports, comebacks are not at all uncommon, but perhaps none match the story of Joo Jeong-hun.

Joo lost his right hand in a horrific accident as a baby, but he competed in taekwondo as a kid and was treated as an equal by his peers. He then got discouraged and embarrassed, and he gave up.

Taekwondo has been added as an event in the 2020 Tokyo Paralympics, and Joo is competing in the para Games and setting his sights high.

“I want to win a medal at the Paralympics,” Ju said.

In terms of sports in which Korea is competitive, taekwondo has been at the top of the list. Since taekwondo was officially added to the Olympics in 2000, Korea has won the most medals.

Normally, in para taekwondo, contests in two different disciplines - poomsae and kyorugi - are held. But at this year’s Paralympics, only kyorugi, a sparring type of taekwondo, will be an event. The points system will be a little different from regular taekwondo, as athletes are not allowed to attack the face of their opponent.

Joo is considered a contender. At the 5th Asian Para Taekwondo Open Championships in Amman, Jordan, in July 2019, Joo picked up a silver in the men’s 75-kilogram (165-pound) division.

Joo became the first-ever Korean para taekwondo participant to advance to the final at this tournament. Of the 26 para taekwondo competitors who participated in this event, Joo defeated the practitioners ranked third and fourth in the world ranking to get to the final. He lost to the top-ranked Mahdi Pourrahnama of Iran.

“I couldn’t believe it,” Joo said. “I started to think that I could go to the Paralympics.”

Joo became impaired when he was only two years old. He put his right hand into a hay cutter while his grandmother, who took care of him at the time, was away for a brief moment.

“Once I got older, I was told about the accident,” Joo said. “When I was little, my friends treated me well, so I didn’t think I was special.”

He started taekwondo in second grade at elementary school, and he competed against non-impaired competitors. Joo participated until high school. However, once he entered adolescence, he started to feel ashamed of how he looked, lost his focus and started just wandering around.

“I quit taekwondo about twice,” Joo said. “Since I can’t get my balance, I tend to fall back after a kick. Also, I hated showing myself to others. So in second grade in high school, I gave up.”

Once he quit the sport, Joo started helping his parents at their restaurant in Changwon, South Gyeongsang.

Seven years have passed since he left the sport, and Joo never missed it until the winter of 2017. It was then that he heard that taekwondo has been added as the official sport at the 2020 Paralympics. People around him started supporting and encouraging him to give it another shot, and Joo returned to the sport.

But it wasn’t easy starting over. He had to lose weight and start training again just like when he was back in high school. He finally regained his confidence at the Asian championship.

Now he is focusing only on the Paralympics, which are about seven months away.

Although he quit the sport because he hated showing himself, Joo said his perception has changed now.

“I hope the impression toward people with disabilities changes,” Joo said. “My dream is for us to be looked up to rather than to have sympathy for us.” 