After defying expectations with a last-place finish in the 2018 KBO regular season, the NC Dinos appointed Lee Dong-wook as their new manager, a move that took many by surprise. 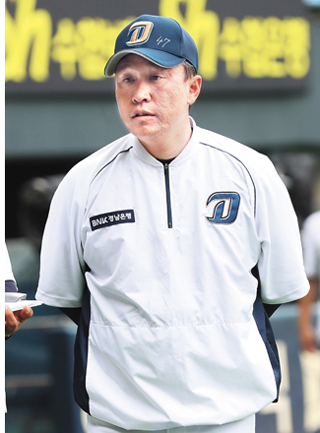 Yet in his first season with the club, he led the Dinos to an upset, finishing fifth in the 2019 regular season standing with 73 wins, two draws and 69 losses. Lee’s skills as manager stood out as the Dinos managed to clinch that last postseason spot despite being plagued by injuries to their starting players.

Despite losing to the LG Twins in the wildcard game, the Dinos in January opted to extend Lee’s contract another two years.

With that, Dinos fans have once again raised their expectations, and under Lee they are hoping to see the team pick up their first-ever Korean Series victory. For his part, however, Lee said he is focused on improving his team first and believes the club will find success.

The Dinos are currently in spring training in Tucson, Arizona. Below are edited excerpts of Lee’s interview with Ilgan Sports.

Q. You’ve already spent some time in spring training. What do you think of the team in general?

A. Spring training, which started in February, seems to have settled now. The players’ physical conditions look so much better than I expected. There are a lot of pitchers who have prepared to a point where they can jump straight into the bullpen and start pitching from the start of the training. The fielders also look great.

The Dinos’ starting outfielder Na Sung-bum was out for the season due to a knee surgery. How’s he looking now?

He’s already started his normal batting training over the past few days. He’s been training on defense, where he’s working on catching grounders. He is scheduled to start other trainings as well. Pitcher Koo Chang-mo, who suffered a stress fracture at the end of the season last year, started bullpen pitching on Friday.

The Dinos seemed to have one too many injured players throughout the 2019 season. How did you manage to get through the season?

It’s hard to avoid injuries that occur during a game. That’s why I need to add more depth to the other players for Plan B.

Due to the absence of some of the starting players throughout the 2019 season, the Dinos got to see great potential from backup players. What do you think?

Even the spots for the catchers are competitive. As the first backup, Kim Tae-gun, Kim Hyung-jun and Jeong Beom-mo are competing. In the infield, we have a lot of utility players. Kim Tae-jin can really threaten the starting second and third basemen, and at short stop, we have No Jin-hyuk, Kim Chan-hyung and Yoo Young-jun. There’s this strange tension during training.

What position will the Dinos’ new foreign player, Aaron Altherr, be at?

He has great athletic ability, chasing after hits, throws - and he’s just good all around. I’m thinking of him as a center fielder. But I would have to see it first. In terms of outfield, it can change depending on how Na Sung-bum does on defense. In the beginning of the season, I’m thinking of assigning him mostly as a designated hitter. Kim Seong-uk, Kwon Hui-dong and Kim Jun-wan will be competing for the outfield position.

Finding a fifth starter in the rotation and the set-up men are our main topics. In our opening rotation last season, I gave Kim Young-kyu a chance, and toward the end of the season I gave a chance to Choi Sung-young. Those are the two candidates. I’m thinking of having right-handed pitcher Shin Min-hyuk as our preparatory starter, to raise some competitiveness. Back in high school, his tossed a no-hit, no-run game. He knows how to throw the ball.

Pitcher Park Jin-woo also has experience as a starter. Do you have any thoughts on adding him onto the starting rotation?

He is a player who can also be a long reliever. Since he can fulfill different roles, I’m thinking of [using him as] a bullpen pitcher.

The Dinos have a lot of set-up pitchers. What’s your plan as to their positions this season?

Just like last season, I’m thinking of Won Jong-hyan as our closer. But our former closer Lim Chang-min looks good, too. I’m going to come up with our team of set-up men based on Jang Hyun-sik, Kim Geon-tae, Bae Jae-whan, Kang Yoon-goo and Lim Jeong-ho.

You re-signed your contract in January, so you will be managing the Dinos for two more years. How do you feel?

I’m thankful to the club. If the 2020 season was my last season on the contract, then I could be in a position to be rushing for a result. Two years can be a long time, but it can also be a short time. I considered it as the club asking me to lead the team to a stable position.

When you first got appointed as manager, during spring training that time, you were confident about the team advancing to the postseason. What’s your goal for this season?

I didn’t come up with an exact plan on the number of wins. Rather than competing against other teams, I think it’s a competition within our team. It’s important for our team to get one step forward to achieve the goal that we set. If we become a better team than last year, then we’re successful.

Some people believe that this season could be the Dinos’ year to win. What do you think?

Just because there are a lot of fishing poles in the pond, doesn’t mean that you catch a lot of fish. We need the right timing. Last season, when we were competing for the fifth-place spot, I told my team to not think about the standings. If we look far ahead and don’t get greedy, we believe that we’ll get our chance. I’m not going to miss it when we get the chance. NC will go NC’s way.