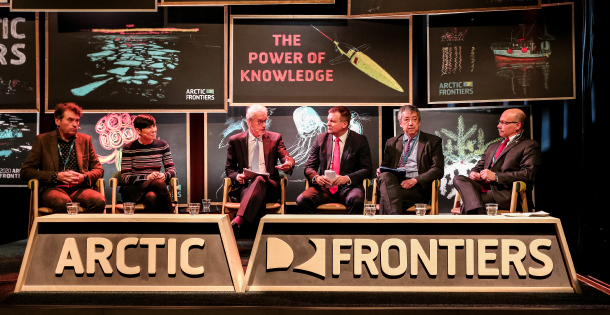 TROMSO, Norway - A vaccine for the coronavirus has yet to be developed. The key to one may lie in the plants found in the Arctic tundra, according to one scientist.

“Around 10 years ago, a lot of people died from a novel influenza virus as it spread at a dangerous rate,” said Lee Yoo-kyung, senior researcher at Korea Polar Research Institute (Kopri). “The vaccine that was developed, called Tamiflu, is made out of shikimic acid, which is extracted from a plant that grows in China and Southeast Asia, called star anise, or Illicium verum.” 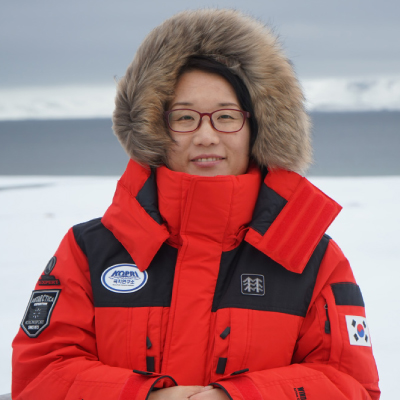 Lee studies tundra vegetation and is part of a group of scientists from Korea conducting research on the Arctic region.

“Tundra vegetation survives in climates and conditions that would kill other plants,” Lee said. “There is some secret to their survival that could provide us more solutions for our world, but unfortunately a lot of them are dying out before we get to find out more about them.”

Not much has been written about Korean scientists and their work in the Arctic. While attending Arctic Frontiers, the annual conference on Arctic affairs hosted in Tromso, Norway, from Jan. 27 to 30, the Korea JoongAng Daily found that not only has the country been doing more in the region than what one may expect, but there is a good amount of support for their contributions from the most powerful actors in the region.

Korea’s place in the Arctic

Korea’s work in the Arctic dates back to 2002, when it established the Dasan Arctic Science Center in Svalbard, Norway.

“We have been working together with scientists in Norway to monitor black carbon and dimethyl sulfide [DMS], both of which have come under the spotlight since heightened global interest in climate change and its effects in the Arctic region,” said Lee who was stationed in Dasan in 2003 and came back yearly from 2011 to 2018.

It was also a Korean scientist studying the Arctic region who initiated the process to apply for Korea’s observer status at the Arctic Council, the forum of eight Arctic nations that decides policies at large in the region.

“It seemed like the right thing to do,” said Seo Hyun-kyo, policy researcher and advisor at Kopri. “Kopri by that time had done more research in the Arctic than any other institution in Korea, and I thought that if Korea was able to win the status, it would be a win-win for both the country and the institution as its work would be expanded in the Arctic.”

Seo spoke to Korea’s Foreign Ministry in 2008 and they began the work to submit an application for the observer status. They applied in 2009, but the decision, which is made every two years, was deferred twice. Korea gained its observer status in 2013.

Korea has been participating in a number of these working groups, including the Emergency Prevention Preparedness and Response (EPPR) working group, a part of whose work is to respond to oil spills, and the Arctic Monitoring Assessment Programme (AMAP) working group.

“I have been part of the AMAP since 2013. Initially, it felt like [the council] was not expecting much [from Korea],” said Lee. “But as we continued to participate in the meetings consistently and shared Korea’s findings regarding the region, we became a regular contributing member of the working group.”

“Korea is a more engaged partner in the [EPPR] working group,” said Nina Agren, project officer of the Arctic Council, during a meeting with the Korean delegation on Jan. 27.

Seo said scientific developments can pave the way for diplomacy.

“Take the example of the Chinese icebreaker Xue Long,” he said. “It went to Reykjavik in 2012 for research. The next year, a China-Iceland FTA was signed.

“I’m not advocating that we should use science to get a place for some kind of economic development in the region,” Seo added. “But Korea making any contribution in the scientific research in the Arctic itself is already doing something for the country in terms of its image-making in the region.”

The Korean Foreign Ministry, which in recent years created a specific position focusing on the Arctic region, is hoping to do more in the area.

“More countries are looking toward the Arctic region, and Korea is hoping to play a larger role in the region as well,” Kwon Sei-joong, ambassador of Arctic affairs at Korea’s Ministry of Foreign Affairs, told the Korea JoongAng Daily during the conference. “There are eight member countries to the Arctic Council, but the issues of the Arctic region, like the melting of the sea ice, affect countries all over the world. The Korean government is interested in taking part in the discussions regarding the region and recently adopted an Arctic policy as well.”

The same year that Korea became an observer nation at the Arctic Council, it issued a four-year plan on the Arctic region focusing on scientific research and shipbuilding for use in the Arctic, a plan that was renewed in 2018. More recently, in October 2019, it ratified the Agreement to Prevent Unregulated High Seas Fisheries in the Central Arctic Ocean. 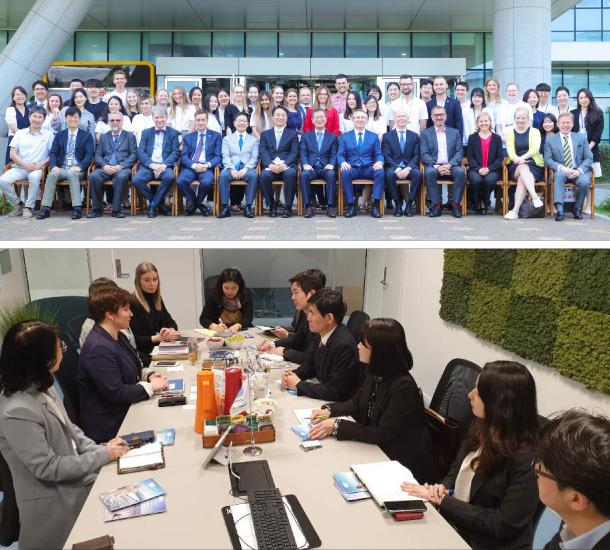 Top: University students from UArctic network and ambassadors of Arctic nations in Korea celebrate the commencement of Korea Arctic Academy at Korea Maritime Institute in Busan in 2019. Above: Members of the Korean delegation that traveled to Tromso, Norway, to attend the Arctic Frontiers, meet with members of the Arctic Council Secretariat in the city on Jan. 27. [KOREA MARITIME INSTITUTE, KOREA POLAR RESEARCH INSTITUTE]

Korea may be doing more in the Arctic than ever before. But is the region ready for more actors?

“Climate change is the single greatest accelerant in the geopoliticization of the Arctic,” said Bobo Lo, an international relations analyst, during a session on the state of the Arctic on Jan. 27. “[The] region is no longer insulated from larger geopolitical and security tensions - witness to Russia’s military build-up in the region, and also the increasingly aggressive stance of the Trump administration.”

Talks about changing geopolitical order in the Arctic region took up most of the conversation at the Arctic Frontiers’ main session on its first day.

When Lo suggested an alternative governance structure to the existing one to meet the challenges posed by an increase in actors in the region, there was evident discomfort at the idea from some representatives of the Arctic nations.

“Chief among such arrangements might be a new Arctic treaty,” Lo said. “Such a treaty would not just cover scientific and environmental issues but also include political and security provisions. It would among other things encompass rules, freedom of navigation, force deployments and security confidence-building measures.”

The Arctic Council’s mandate, the Ottawa Declaration, signed in 1996, does not entail military and security matters in the Arctic.

“The policy that we are pursuing together with all other Arctic states is that the framework that we have is actually both viable, but is also sufficient to cover what we have at the moment,” said Ine Eriksen Soreide, foreign minister of Norway.

“I am very uneased by the idea that we should start making new treaties or new legal framework because I don’t think there is a need for it, and I think what we have to continue to do is put a lot of emphasis on the cooperation that we have.”

“We hear different things from other countries,” said Ville Skinnari, Finnish minister for development cooperation and foreign trade. “But obviously the most important thing is that we have dialogue, the Arctic council and like this meeting today [in which] we can share our thoughts.”

The representatives of Arctic countries at the conference all agreed that what happens in the Arctic affects the rest of the world, but their opinions inevitably differed on how best to govern the increasing interest in the region.

From the perspective of economic development, however, collaborating with non-Arctic countries is not a bad idea.

“I think that, with the opening of the Northern Sea Route, countries like South Korea, Japan and China would play a more active role,” Rune Rafaelsen, mayor of Sor-Varanger municipality in Kirkenes, which borders Russia, told the Korea JoongAng Daily on Jan. 28. “I think that’s very positive. Norway should be more active [in working] with South Korea because we are also a shipping nation.”

The use of the Northern Sea Route can reduce the shipping time drastically, said the mayor.

“For instance, we made a test with shipping iron coal to Shanghai,” he said. “It took 80 days. If this operation would go through the Suez Canal it would have taken 40 days, so I think what you are doing in South Korea, building good ships that are also being operated in the Arctic, is very positive for the development.”

Rafaelsen said that his city has already been working with Japan, Finland and Russia to install a telecommunications cable in the city for better connection.

Engaging with the community

Despite the changing geopolitical order in the Arctic, some directions remain clear for Korean institutions in going forward with their research in the area, and that is to engage the young and indigenous communities in the Arctic.

“It’s very important at forums such as this that we hear from young scientists,” Kim Min-su, director of the Northern and Polar Research Department of Korea Maritime Institute (KMI), told the Korea JoongAng Daily.

The KMI has been running annually Korea Arctic Academy, a two-week program for 20 students from universities in the UArctic network, since 2015.

“Every year, we are inviting students from indigenous communities in the Arctic,” Kim said.

Julie Babbin, a graduate of the program, said that the Arctic policies of Asian nations are increasingly a topic of interest for students in the field.

“I was a [part] of the Korea Arctic Academy in 2019, it was actually the third time for me to apply because I had been interested in Korea’s arctic policy for a while,” said Babbin, a Ph.D. student on Asian arctic policy at Laval University in Quebec. “We can see now that the Arctic connects the world and that what happens in the Arctic won’t stay in the Arctic. It will have global implications.”