A patron of the arts, CJ executives shares Oscars stage

A patron of the arts, CJ executives shares Oscars stage 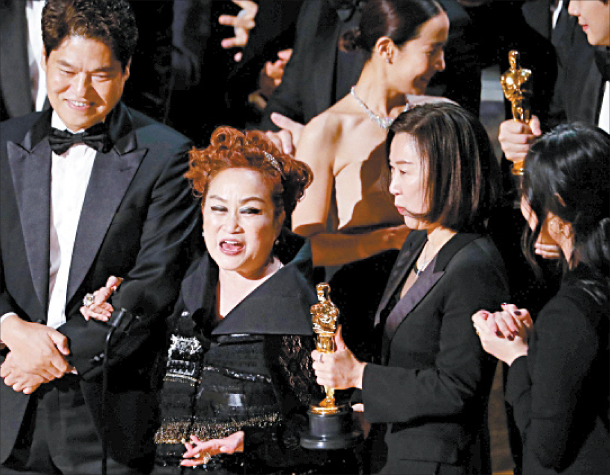 Miky Lee, vice chairwoman of CJ Group, took the stage with director Bong Joon-ho Sunday to accept the award for Best Picture for “Parasite” at the 92nd Oscars at the Dolby Theatre in Hollywood.

“I like everything about him. His smile, his crazy hair, the way he talks, the way he walks and especially the way he directs. But, what I really like about him is his sense of humor. Because he can really make fun of himself and never takes himself seriously,” she added.

“And I’d like to thank my brother, who has been always supportive in building our dreams, even when it looked an impossible dream.”

In the past 25 years of leading CJ Group’s film business, the Lee siblings naturally forged a close relationship with director Bong by funding his films, “The Host,” “Memories of Murder,” “Mother,” “Snowpiercer” and “Parasite.”

With its $40 million production cost, “Snowpiercer” struggled to attract foreign investors ahead of filming. Chairman Lee decided to take charge of the entire production cost, allowing the movie to become a reality.

Industry officials say that it would have been difficult for “Parasite” to win without the Lee siblings’ support and investment.

Bong specifically thanked “the CJ family for their great support” during his acceptance speech after winning the Palme d’Or at the Cannes International Film Festival last May.

“The investment over the past 25 years has not been wasted, and the film has raised the value of Korean movies around the world and enhanced its national cultural prestige,” Chairman Lee was quoted as saying after the film won the Palme d’Or.

The older Lee, who was not seen in public for a while due to health reasons, appeared last year after that win, as well as when “Parasite” won Best Foreign Language Film at the Golden Globes. After stepping down against her will from managing CJ Group in Korea in 2014, she has been living in the United States and working in the foreign entertainment industry.

“It’s normal for the CJ to sponsor ‘Parasite’ and director Bong,” Fortune said. “Miky Lee has been supporting artists, especially in the movie industry.”

CJ Group entered the industry in 1995 and since “Inch’Alla” in 1997, it has invested in more than 300 Korean films. As a distribution company, CJ Group is said to have laid the foundation for the industrialization of Korean films. The accumulated investment by CJ Group in the cultural industry is worth 7.5 trillion won ($6.3 billion).