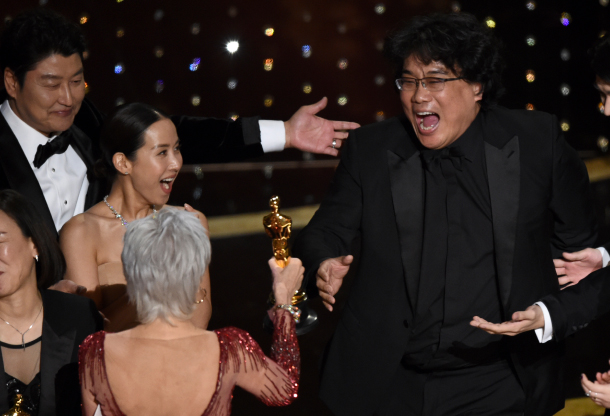 Bong Joon-ho, far right, reacts as he is presented with the award for Best Picture for “Parasite” from presenter Jane Fonda at the Oscars on Sunday at the Dolby Theatre in Los Angeles. [AP/YONHAP]

It was also the first foreign language film to ever receive the Best Picture award.

“Thank you,” Bong said after winning Best Director, the third win of the night. “I will drink until next morning.”

Although press around the world predicted at least one win for “Parasite” - Best International Feature Film seemed the surest bet - the other three wins were a sweep few expected, particularly Best Picture.

“I’m speechless,” the film’s producer Kwak Sin-ae said through tears while accepting the Best Picture Oscar at the Dolby Theatre in Los Angles. A large number of the cast and crew of “Parasite” took to the stage upon the film’s epic victory.

“We never imagined this to ever happen,” Kwak continued. “We are so happy. I feel like a very opportune moment in history is happening right now. I express my deepest gratitude and respect to all the members of the Academy for making this decision.”

From the very beginning of the ceremony, the genre-bending satire of class warfare was spotlighted for six nominations. And then it became the first Asian film to win Best Original Screenplay, an award shared by Bong and screenwriter Han Jin-won.

“Writing a script is always such a lonely process,” said Bong through interpreter Sharon Choi. “We never write to represent our countries. But this is very first Oscar to South Korea.… I thank all the actors who are here with me today for bringing this film to life.”

Han spoke after Bong, saying he hopes to “share this honor with all the storytellers and filmmakers at Chungmuro [the center of Korea’s film industry].” While Han was speaking, the camera caught Bong grinning and lovingly stroking his first Oscar, seeming not to believe his luck.

Bong’s reaction was understandable as the film defeated screenplays for “Once Upon a Time… in Hollywood” by Quentin Tarantino, “1917” by Sam Mendes and Krysty Wilson-Cairns, “Knives Out” by Rian Johnson and “Marriage Story” by Noah Baumbach.

After losing out to “Once Upon a Time… in Hollywood” in the Production Design category and to “Ford v Ferrari” in Film Editing, Bong took the stage again to receive the Best International Feature Film Oscar, which was known as Best Foreign Language Film until this year.

“I’m so happy to be its first recipient under the new name,” Bong said. “I applaud and support the new direction that this change symbolizes.”

Bong clearly did not anticipate his next victory, as Best Director.

“After winning Best International Feature, I thought I was done for the day and was ready to relax,” Bong said.

“When I was young and studying cinema, there was a saying that I carved deep into my heart, which is ‘The most personal is the most creative.’ That quote was from our great Martin Scorsese… Just to be nominated [alongside Scorsese] was a huge honor.”

“If the Academy allows,” he concluded, addressing his fellow nominees for Best Director, “I would like to get a Texas chain saw, split the Oscar trophy into five and share it with all of you.”

What virtually no one anticipated was the winning of Best Picture. In the entire 92-year history of the Oscars, no foreign language film has ever claimed the highest Oscar honor. “1917” had received 10 nominations and was considered the front-runner.

It was only the third time in cinematic history that the winner of the top prize at the Cannes Film Festival also won the Best Picture Oscar after “The Lost Weekend” (1945) and “Marty” (1955).

According to film critic Hwang Jin-mi, Bong’s interview with the American entertainment media outlet Vulture last October had an impact. In it, Bong defined the Oscars as a “local” film festival.

“Of course, the Oscar [result] was affected by Bong’s words,” Hwang said. “His words couldn’t have been more timely. I believe it gave a huge shock to the Academy. They never would have thought of the Oscars in that way. What Bong said would have wounded the pride of those [Academy members] who naturally perceived it to be global. The winning of Best Picture for ‘Parasite’ is the Academy’s way of showing how actions speak louder than words, signifying that the Academy Awards is not a local event, that we embrace Asia too. That there’s everything [in the Oscars].”