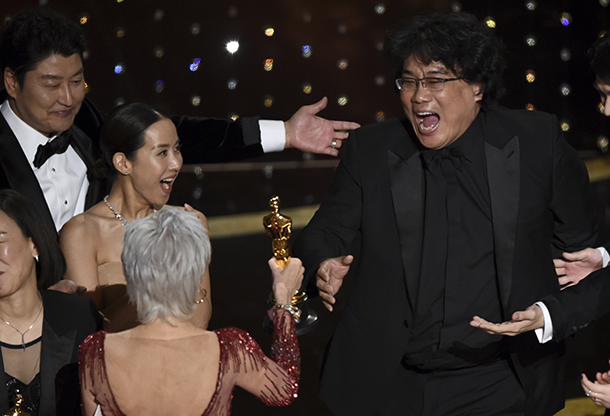 Bong Joon-ho, right, reacts as he is presented with the award for best picture for "Parasite" from presenter Jane Fonda at the Oscars on Sunday at the Dolby Theatre in Los Angeles. [AP/YONHAP]

It was also the first foreign language film to ever receive the best picture award.

The film’s first Oscar came for Best Original Screenplay. Director Bong Joon-ho and scriptwriter Han Jin-won took to the stage at the Dolby Theater in Los Angeles to collect their trophies, winning over screenplays for “Once Upon a Time… in Hollywood” by Quentin Tarantino, “1917” by Sam Mendes and Krysty Wilson-Cairns, “Knives Out” by Rian Johnson and “Marriage Story” by Noah Baumbach.

More predictable was the film’s win in the category of Best International Feature Film. Again, director Bong took to the stage to receive the Oscar.

He returned after winning Best Director amidst a standing ovation from other director nominees: Martin Scorsese, Todd Phillips, Sam Mendes and Quentin Tarantino.

Bong became the second Asian filmmaker to win Best Director after Ang Lee for “Life of Pi” at the 85th Academy Awards.

But what few anticipated was the winning of Best Picture. In the entire 92-year-history of the Oscars, no foreign-language film has ever claimed the highest Oscar honor before “Parasite.”

The ceremony was held by at the Dolby Theatre in Los Angeles on Sunday.