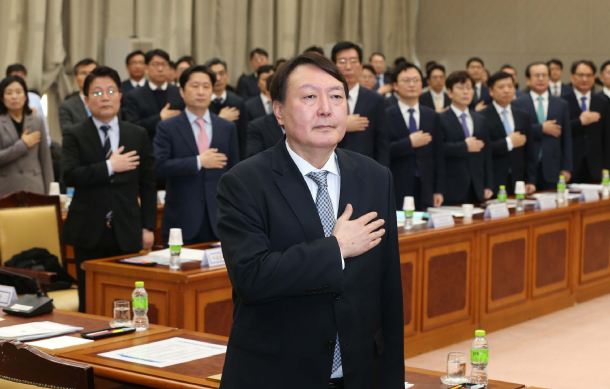 Prosecutor General Yoon Seok-youl, center, presides over a meeting with senior prosecutors from 59 district branches across the country - including all 18 regional chief prosecutors - at the Supreme Prosecutors’ Office in southern Seoul on Monday to discuss the upcoming general elections in April. [OH JONG-TAEK]

The prime minister’s office on Monday launched a task force to build a new anticorruption agency focusing on crimes by top-ranking officials, which is supposed to start operating in July.

In a ceremony at the Central Government Complex in central Seoul, former Minister of Government Legislation Nam Ki-myung, who Prime Minister Chung Sye-kyun appointed as head of the task force last week, pledged to build an entity capable of “ending corruption and special treatment in the civil service.”

The task force is composed of around 20 officials from the ministries of justice, interior, finance and government legislation. It will determine the organization’s structure, budget and personnel requirements.

According to the law creating it, which was passed amid fierce partisan battles last Dec. 27, the agency will be staffed by around 30 to 50 investigators, each with over a decade of experience as a prosecutor or attorney. The organization’s head will be appointed by the president from a shortlist of candidates selected by a committee of seven people, including two selected by opposition parties. The National Assembly must approve the head.

The new agency addresses a longstanding debate in Korean politics about the powers of state prosecutors, who for decades have monopolized the authority to launch and close criminal investigations and indict suspects.

For months now, prosecutors under chief Yoon Seok-youl have been at loggerheads with the Moon Jae-in administration, which wants to curb their powers. Prosecutors have hit back at the Blue House with a series of high-profile investigations aimed directly at top aides and associates of the president.

While Choo was attending the ceremony to launch the task force building the new agency, Yoon on Monday summoned prosecutors from 59 district branches across the country - including all 18 regional chief prosecutors - to a meeting at the Supreme Prosecutors’ Office in southern Seoul to discuss the upcoming general elections in April.

The prosecution typically holds such a meeting ahead of major national elections to review responses to election-related crimes.

Yoon urged the prosecutors to prepare for unprecedented contingencies in the April elections, noting that the recent changes to the electoral system warranted special attention.

“I ask that each one of you remind yourself that you are defenders of our country’s constitutional order and that you do your utmost to firmly and strictly respond to electoral crimes and ensure fair competition is maintained,” Yoon said.

“For prosecutors, political neutrality is like a lifeline - for a prosecutor to be politically biased is equal to corruption.”