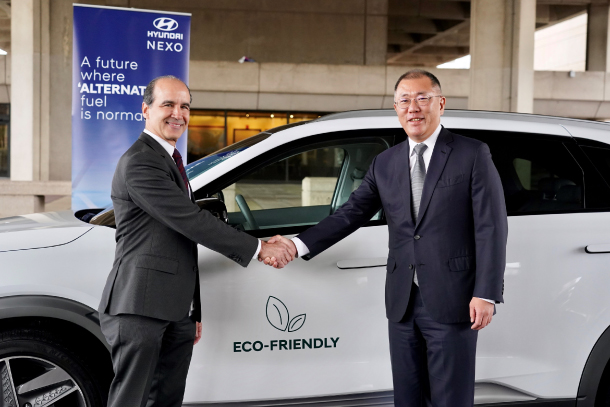 According to the Korean carmaker, officials and executives of both sides got together Monday at the department’s Washington headquarters to sign an agreement to “help address technical barriers and enable progress in hydrogen and fuel-cell technologies across applications and sectors.”

Hyundai has worked with the U.S Department of Energy in hydrogen and fuel-cell technology since 2004, with the carmaker supplying fuel-cell electric vehicles (EVs) for the department’s programs.

Under the new agreement, Hyundai will provide five of its Nexo fuel-cell EVs to the U.S. department. The vehicles will be operated under harsh conditions to test their durability, fuel efficiency and functionality.

The two worked on a similar project between 2004 and 2009 when 33 Hyundai fuel-cell EVs were run through steep mountains in high temperatures between 35 to 40 degrees Celsius (95 to 104 degrees Fahrenheit).

The carmaker will also contribute to setting up a small-scale hydrogen fueling station in Washington this fall, which joins the company’s existing fuel-cell EV chargers in Paris, Tokyo and Seoul.

According to Hyundai, the company’s previous work on fuel-cell EVs with the department was in California, its main testing bed for eco-friendly vehicles.

“The Monday agreement is meaningful for us in that it sets the ground to expand the scope of our partnership across the entire country,” said a Hyundai spokesman.

According to market research firm MarkLines, the United States ranked No. 1 in the world for the number of fuel-cell EVs sold last year, at 7,937 units.

Another goal of the partnership is analyzing data obtained from the vehicles and infrastructure to provide insight on how the technology will work in real operating conditions.

This data and analysis will be shared with external researchers, government offices and industry players for academic or training purposes.

Hyundai and the U.S. Department of Energy will also work together to develop workforce training programs for fuel-cell EVs and hydrogen technology, as well as bringing experts and researchers together in one place.

“With the potential for application across multiple industries, we firmly believe that hydrogen fuel cells are necessary for a sustainable future,” said Chung. “We are delighted that our technologies can help the U.S. Department of Energy as it continues to explore the future potential of hydrogen.”

“The Trump administration is committed to utilizing every source of energy to ensure America’s transportation needs and challenges are aptly met and resolved,” said Menezes. “To meet this commitment, it is essential that we collaborate with industry.”