Bong Joon-ho was ecstatic. Korea was proud. And the owners of Dwaeji Supermarket were overjoyed.

“Parasite” had just won four Oscars and was the first non-English-language film to be named Best Picture at the Academy Awards. The excitement in Seoul was palpable.

Not even the coronavirus scare could dampen the mood created by “Parasite.”

But the cheer was especially noteworthy out at Dwaeji Supermarket, which sits in Ahyeon-dong, an old residential neighborhood in Mapo District, western Seoul. The establishment was featured in an early, and pivotal, scene in the film.

At around 1:40 p.m. on Monday, about the time when the final award was announced, the 74-year-old proprietor of the shop let out a cheer. 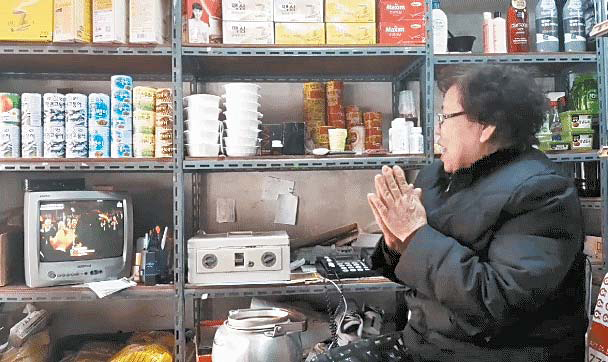 “I couldn’t be happier to see our supermarket honored in this way,” said Kim Kyung-soon.

In the scene in which Dwaeji Supermarket appears, two characters drink soju at a table in front of the supermarket discussing one of them - Ki-woo - taking a tutoring job.

It is the MacGuffin scene of what has become an instant classic.

In the background, a long set of stairs are visible. Later, the three main characters run up those very stairs, which has become a symbol of class conflict in the film.

As life often imitates fiction, Kim’s husband wasn’t with his wife at Dwaeji Supermarket when “Parasite” received the Best Picture award, as just a few minutes earlier he had to rush out to make a delivery.

“I was waiting for the awards ceremony since the day before,” said Lee Jung-sik, her husband. “But I knew that ‘Parasite’ would win Best Picture.”

The popularity of the film, and the many awards it has won, has helped lift sales at the supermarket. Kim and Lee have been struggling as giant supermarket chains eat away at their customer base. The “Parasite” uptick has helped slow the long decline, at least for now.

“Our sales didn’t increase all that much from ‘Parasite,’ but being popular itself makes us happy,” Kim said with a smile. “I’m happy that the film won four famous awards, and I’m happy that our supermarket became famous as well.”

“When Director Bong Joon-ho called out ‘action,’ actors started moving without words,” he said. “They were doing that multiple times on and on, which made me laugh all of sudden.”

During production, Dwaeji Supermarket was packed with people other than the film crew. Neighbors rushed to see Korean celebrities starring in the film, especially actor Song Kang-ho.

“Everyone in the neighborhood came to the supermarket because they heard Song Kang-ho was coming,” he recalled. “Even when it was raining, 30 to 40 residents rushed out to watch the scene being filmed. Crew members were pouring water from above to make it look like it was raining, and Song Kang-ho and Choi Woo-shik were rushing up and down the stairs for three to four hours straight.”

“I watched the scene taking place right across from the supermarket, and when a young actor arrived, several bodyguards dressed in black suits came along for protection,” he added. “I thought Song Kang-ho was famous, but younger male actors had more bodyguards with them.”

After the film was shot, an increasing number of tourists came by to see the supermarket and the staircase. Although many of them were Koreans right after the film was released domestically in May, the number of foreign tourists visiting surged since “Parasite” hit U.S. theaters in October.

On the day of the Academy Awards, a foreign female stopped by the supermarket to take pictures from the outside.

She was one of many fans on a “Parasite” pilgrimage.

Lee’s relative posted a sign in front of Dwaeji Supermarket saying that “Parasite” was shot there.

“A couple of days ago, a Spanish guy came by to buy tangerines and apples,” Lee said. “After ‘Parasite’ launched in the United States, at least one or two people come to our supermarket everyday.”

“I feel like a celebrity myself as so many people are coming to take pictures of us and the supermarket,” said Kim, Lee’s wife, who added that the Spanish tourist even took a selfie with her during his visit.

During the interview, Kim also proudly showed pictures she took with Japanese and Spanish tourists.