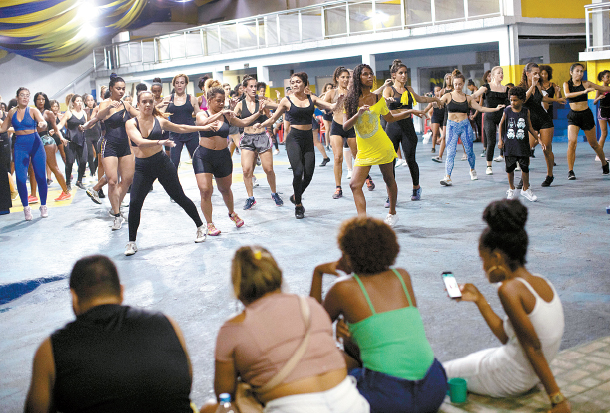 At rehearsal for the Paraiso de Tuiuti samba school, a dancer poses for photos with admiring onlookers while wearing the bright yellow uniform and sky-high heels of the school’s elite passista samba dancers.

Paraiso de Tuiuti has been a cradle of Carnival culture for people in the working-class area near downtown Rio de Janeiro for over 60 years. But the dancer herself is an import. Jessica Hahn-Chaplin hails from Bristol, England.

Hahn-Chaplin, 31, is part of the movement of foreigners who come to Brazil to train in the ways of hip swiveling and hot stepping. They’re spending months at the samba schools that during Rio’s world-famous Carnival will dance for more than an hour through Rio’s 700-meter (2,300-foot) Sambadrome, delighting 70,000 spectators plus tens of millions of television viewers at home.

After the parade, the outsiders return home and spread their samba fever.

During classes, casually dressed students can be seen brushing their feet in a quick succession of steps, their hips swinging to the right and left while keeping their heads and shoulders as still as possible. On the floor before each of them lies a thin foam cylinder, which they must avoid touching with each swift step as their instructor calls out the tempo.

These are no beginners classes. All foreign applicants have passed a selective exam to join this advanced-level course and train alongside Brazilians who have danced samba since childhood. The course is free. But leaving their jobs for months at a time is not. It’s proof of their commitment to samba.

Once a week, they join the entire Paraiso de Tuiuti rehearsal on the street leading up to the school. Passistas and percussionists, all decked out in yellow costumes, temporarily turn the dark avenue into a mini-Sambadrome.

“It was very intimidating,’’ Hahn-Chaplin said of dancing as a foreigner in front of hundreds of people at the rehearsal. “We put a lot of pressure on ourselves to make the mark.’’

Hahn-Chaplin, a language teacher and dancer instructor, is one of 15 foreigners who converged from four continents to study at the feet - literally - of teacher Alex Coutinho. The best dancers join Paraiso de Tuiuti in its official parade, this year scheduled for Feb. 23.

“Samba dancers, as with any other profession, need to recycle themselves. Every year, there will be a new thing: a different arm move, a different step,’’ Coutinho said. “They come here, do classes and return to their countries with the skills to pass on to their students. They’re propagating our culture.’’

Another dancer, Rie Tankana, travels all the way from Japan, where she performs at Tokyo’s annual Carnival celebration. She found Paraiso de Tuiuti School on Instagram last year and is participating for the first time this year.

“It’s happiness in my life, it’s healing,’’ said Tanaka, 33, who is a jobs recruiter in Osaka, Japan, when not flinging her hips from side to side.

A 2019 video of Tanaka in Kobe, Japan, shows her front and center, leading a line of Japanese samba dancers with butterfly wings draped on their arms.