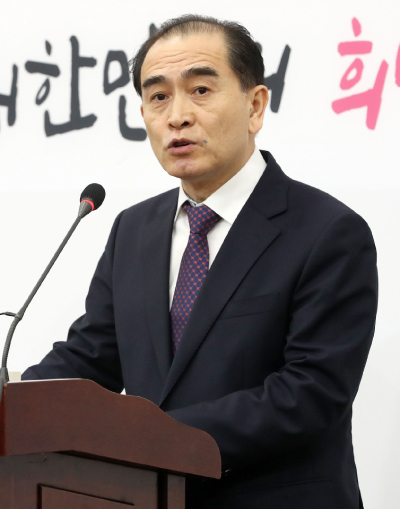 Thae Yong-ho, one of the highest ranking North Korean defectors to the South, announced Tuesday he will run in the general elections in April as a candidate from the opposition Liberty Korea Party (LKP).

In a press conference at the National Assembly, Thae said he would run for a district seat rather than as a proportional representative, adding that if he were elected, it would bring the two Koreas a step closer to unification.

This will be the first time a high-ranking North Korean defector runs for a district seat, though Cho Myung-chul, a defector who worked as a professor at Kim Il Sung University in Pyongyang, served four years as a proportional representative for the Saenuri Party, a predecessor of the LKP, from 2012 to 2016.

“If I am elected a South Korean lawmaker - in a district seat at that - it would instill hope and certainty to the elite in North Korea playing a critical role in the preservation of the North Korean system and regime, to North Korean diplomats working around the world and to the innocent people of North Korea who strive for freedom,” Thae said.

“[My candidacy] will be evidence of how liberal democracy and representative democracy exist for North Korea,” he said.

Thae said the party would decide which constituency he would run in. Kim Hyong-o, the chief figure in the LKP in charge of candidate nominations, said the party was likely to put him up for a seat in Seoul. The most likely choice is Gangnam A, a district in Seoul that leans heavily toward the conservatives. Incumbent LKP Rep. Lee Jong-koo has announced he will run elsewhere.

In August 2016, Thae left his post as deputy ambassador at the North Korean Embassy in London with his wife and two sons and defected to South Korea. He published a lengthy autobiography in 2018 detailing his career as a diplomat for the North and the circumstances behind his escape to the South.

After publishing that book, which was condemned in North Korea’s state media, Thae quit his job as an adviser at a research institute affiliated with South Korea’s National Intelligence Service and became a pundit. As a frequent contributor to the media, Thae has been a loquacious critic of not only Pyongyang, but also South Korea’s incumbent administration, which he regards as being too docile toward the North.

The LKP’s decision to put Thae up for election signals an intention to make criticism of the Moon Jae-in government’s North Korea policy a centerpiece of its campaign in April’s races.

Thae made this evident in Tuesday’s press conference, saying he was prompted to run as a result of a “major frustration” over the “wrong direction taken by current North Korea and unification policies.” In particular, he pointed to the government’s decision to repatriate two North Korean men who fled south after murdering 16 fellow sailors on a squid boat in November, saying he would work to prevent such decisions if elected.

Analysts say the rapid deterioration of inter-Korean ties since last year as a result of a continuing deadlock in U.S.-North Korea denuclearization negotiations has created a landscape in South Korea that may sway voters away from the Moon administration’s conciliatory approach to Pyongyang.

Others however, say the LKP’s fixation with painting the liberal government as “pro-North” contains McCarthyist undertones meant to exploit and intensify the ideological divide in South Korea.