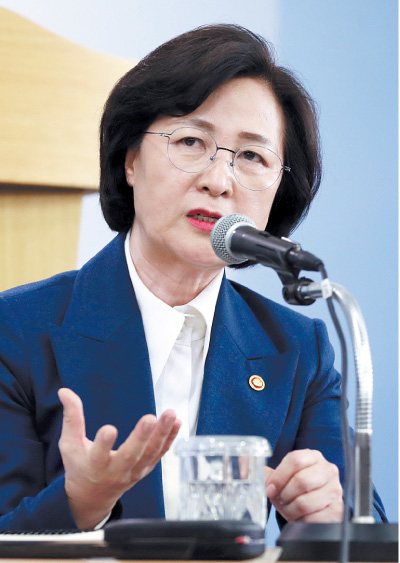 Justice Minister Choo Mi-ae holds a press conference in the Justice Ministry in the Central Government Complex in Gwacheon, Gyeonggi, on Tuesday. [NEWS1]

Three former presidential aides, recently indicted on charges of abusing the power of the Blue House to help President Moon Jae-in’s friend win the 2018 Ulsan mayoral election, said Tuesday that the prosecution tried to give the public the wrongful impression that Moon was involved in the suspected election law violation, calling the indictment document a “political declaration.”

On Jan. 29, the Seoul Central District Prosecutors’ Office indicted 13 people on charges of election law violations, after months of probes into suspicions that presidential aides had helped Ulsan Mayor Song Cheol-ho win the election in June 2018. The prosecution suspected that they had triggered a police investigation into his rival, then-Ulsan Mayor Kim Gi-hyeon of the main opposition Liberty Korea Party, just three months before the race. Kim was cleared of any wrongdoing in March 2019.

Although the Ministry of Justice turned down the National Assembly’s request for full disclosure of their indictment, the Dong-A Ilbo released the full text of a 71-page indictment of the 13 suspects on Friday, prompting the public to question the integrity of the Moon administration.

“The indictment contains many problems,” they said. “It is safe to call the indictment, full of subjective speculations and presumptions, an ‘opinion of the prosecution.’”

“We are perplexed and overwhelmed by the situation as some are even talking about a possible presidential impeachment,” they also said, responding to growing skepticism toward the Moon Blue House’s integrity. Following the full disclosure of the indictment, not only conservative politicians but also liberals criticized the Blue House. In a post on her Facebook page on Sunday, lawyer Kwon Gyeong-ae, a member of the liberal group Lawyers for a Democratic Society, wrote, “The charges in the indictment are clear grounds for presidential impeachment and they deserve criminal punishment.”

“The indictment just wordily describes circumstantial suspicions that cannot even be substantiated with evidence,” they said. “It was nothing but a mere subjective opinion of the prosecution.”

“The prosecution, in the indictment, argued that there was a tacit conspiracy among the accused to inappropriately influence the election, but that is extremely questionable,” the statement also said.

They also argued that the prosecution had used the opinion polls arbitrarily at their convenience. In the indictment, the prosecution said Kim’s approval rating plummeted after the police probe. In the Gallup Korea poll on Feb. 3, 2018, Kim received 40 percent and Song received 19.3 percent, the prosecution said in the indictment. But after the police raids of the office of the Ulsan mayor’s chief of staff on March 16, 2018, Kim’s rating went down to 29.1 percent and Song’s rating went up to 41.6 percent in the April 17, 2018, Realmeter poll.

Meanwhile, Justice Minister Choo Mi-ae continued to defend her decision to stop the full disclosure of the indictment until the trial starts. “It is the first step to correct the wrongful practices,” she said during the press conference on Tuesday.

Asked if she has a plan to exercise her right as the justice minister to directly command an investigation, stipulated in the law governing the prosecution, Choo avoided directly answering.

“It is also important to command and supervise the prosecution to be mindful of the correct attitude and change organizational culture,” she said.