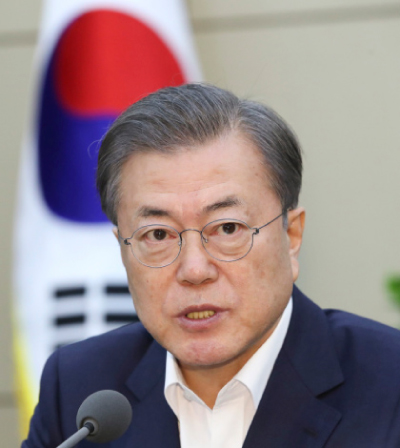 President Moon Jae-in said Tuesday that his administration’s effort to find a resolution that the victims of Japan’s wartime forced labor deem satisfactory is not based on his personal experience as their defense lawyer, but on international principles.

“[Some media] may use the frame that I am continuing my defense for them, but victim-centered justice is the established principle of the international community including the United Nations Commission on Human Rights,” Moon was quoted as saying by a presidential aide on Tuesday. “Victim-centered justice is a principle agreed upon in the international community.”

Moon was responding to the aide, who briefed him about a Yomiuri Shimbun report. The Japanese newspaper ran the first article of its series on Korea-Japan relations, which focused on Moon’s history as a lawyer. It said a law firm in Busan headed by Moon defended victims of Japan’s forced labor during the World War II during their lawsuit in 2000, and that experience has crafted the background of Moon’s determination to seek resolutions from the victims’ perspective.

“I am actually proud of it,” Moon was quoted as saying by the aide. “When I was a lawyer, I never worked in a giant law firm. [When I was not practicing law,] I also didn’t work as an outside director of a company.”

Moon told the aide that victim-centered justice is the norm of the international community, and an earlier agreement between Seoul and Tokyo to compensate the so-called comfort women had failed to win the public backing because it failed to respect that principle. “Therefore, the victims’ acceptance is key when we try to find a resolution to the forced laborer issue,” Moon said. During the presidency of Moon’s predecessor Park Geun-hye, Seoul and Tokyo struck a deal in 2015 to compensate the Korean victims of Japanese military’s wartime sexual slavery. Moon, however, effectively broke the deal in 2017 by calling it seriously flawed, citing the lack of the victims’ consensus. Relations between Korea and Japan further deteriorated after the Supreme Court of Korea ruled in 2018 that two Japanese companies, Nippon Steel & Sumitomo Metal and Mitsubishi Heavy Industries, must compensate individual victims of forced labor.

The rulings have been strongly protested by Tokyo. Japan said all reparations related to its colonial rule of Korea were already settled in a 1965 state-to-state claims settlement agreement. In protest of the Moon administration’s stance, Tokyo has imposed export controls against Korea.

“I understand the victims’ positions better than anyone because I once represented them,” Moon continued. “But I am not promoting the victim-centered justice because of my experience or because I am the president of Korea. I am doing so because that is the grand principle of the international community.”

The Blue House official said Tuesday it is wrong for the Japanese media to tie the issue with Moon’s personal history. “Victim-centered justice is not a personal philosophy of the president,” he said. “It is a largely agreed-upon international principle.”