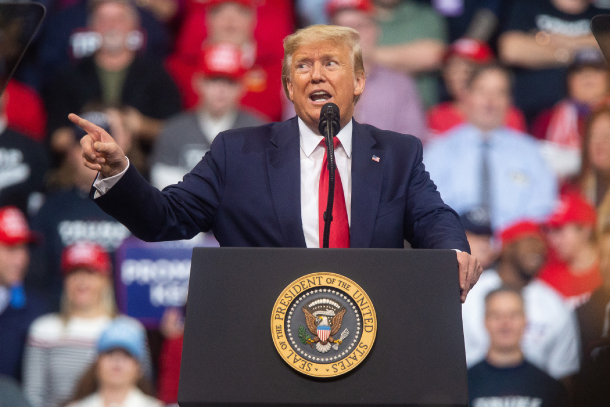 U.S. President Donald Trump told his top foreign policy advisers he doesn’t want to hold another summit with North Korean leader Kim Jong-un before the presidential election in November, according to a CNN report Monday.

Trump expressed frustration after low-level talks with North Korea in Stockholm fell apart in October, according to two sources familiar with the discussions, CNN reported.

Almost one year ago, Kim and Trump held their second summit in Hanoi, Vietnam, on Feb. 28 which collapsed after the two sides clashed over the scope of denuclearization needed for sanctions relief. The two leaders reunited in a hastily arranged meeting in the demilitarized zone at the inter-Korean border in late June 2019 during Trump’s visit to Seoul for a summit with President Moon Jae-in.

The first working-level talks after the Hanoi summit were held in early October, led by Stephen Biegun, the U.S. special representative for North Korea. Kim Myong-gil, Pyongyang’s chief nuclear negotiator, later announced that the talks had broken down because Washington had nothing new to offer. Pyongyang has been warning that it might take “a new path” if Washington does not come up with a new policy.

North Korean leader Kim Jong-un at the end of last year threatened to test a “new strategic weapon” in the near future. Kim also signaled an end to a self-declared moratorium on nuclear and long-range missile tests, which has been maintained since late 2017.

In his third State of the Union address last week, Trump made no mention of North Korea, a contrast from the previous two years. In his 2018 State the Union speech, Trump used tough rhetoric on North Korea and criticized its human rights violations. The detente during the PyeongChang Winter Olympics in February 2018 paved the way for the first North-U.S. summit in June in Singapore later that year.

In 2019, Trump used his State of the Union speech to announce he would hold the second summit later that month in Hanoi and bragged about his good relationship with Kim.

U.S. presidential elections are set for Nov. 3, and Trump, acquitted on impeachment charges last week, is expected to focus on his re-election campaign.

But his key foreign affairs and security advisers still remain committed to reviving denuclearization talks with the North.

Biegun, despite his promotion as U.S. deputy secretary of state, continues to be top nuclear envoy and made a visit to Seoul in December.

Robert O’Brien, Trump’s national security adviser, said in a forum attended by dozens of ambassadors in Washington last Wednesday that North Korea “will come back to the table.” He hinted at the possibility of a third North-U.S. summit and said Trump will “be doing what’s right for the American people, whether it’s popular, unpopular, risky, not risky, right up until the day of the election.”

CNN also reported that U.S. diplomats and members of Congress have been concerned about the Trump administration’s failure to share their approach on North Korea and the next steps it plans to take.

Seoul officials have pointed out that it isn’t surprising that Trump will not want to hold a summit with Kim in the near future, especially one that fails like the Hanoi summit.

Trump has dismissed North Korea’s shorter-range missile tests, and analysts have pointed out that Pyongyang will try to avoid crossing a line by conducting an intercontinental ballistic missile or nuclear test which would force the United States to retaliate.

But the freeze in North-U.S. negotiations could put a damper on President Moon Jae-in’s desire to push various inter-Korean cooperation projects. Seoul has called for resuming individual tourism to North Korea and moving along with projects such as connecting the inter-Korean railways and roads and creating a DMZ peace zone as a means of engaging with Pyongyang and encouraging denuclearization.

Wong, kicking off a four-day visit to Seoul Sunday, also met with Foreign Ministry, Unification Ministry and Blue House officials Tuesday to discuss North Korea issues. Seoul officials were expected to have explained to Wong their ideas for inter-Korean cooperation including allowing individual tourism to the North, which, while not subject to United Nations sanctions, is a matter that Washington could respond sensitively to.

Kim In-chul, spokesman of the South Korean Foreign Ministry, said in a briefing in Seoul Tuesday, “We discussed a wide range of issues including various policy directions and issues that we have publicly revealed recently.”

South Korean Foreign Minister Kang Kyung-wha will visit Germany later this week to attend the three-day Munich Security Conference that kicks off on Friday, expected to be attended by U.S. Secretary of State Mike Pompeo.

Spokesman Kim said that Seoul is in discussions with Washington on arranging a bilateral foreign ministerial meeting on the sidelines of the forum, adding that if such talks are held, “of course the Korean Peninsula situation will be discussed.”

Initially, North Korean Vice Foreign Minister Kim Son-gyong, in charge of European affairs, had been expected to attend the security conference, but Pyongyang has been cutting down outside contacts amid the coronavirus outbreak and Kim reportedly will not be flying to Germany.