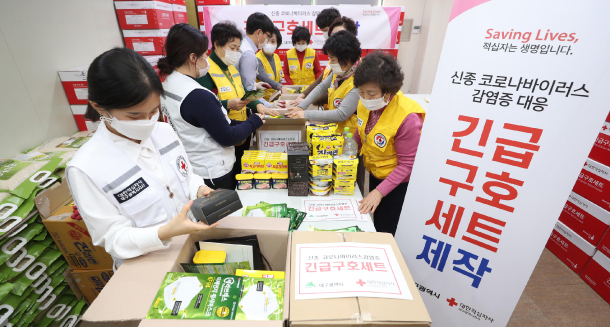 Volunteers at the Daegu branch of the Korea National Red Cross on Tuesday package emergency relief kits which contain bottled water, pre-cooked rice, instant noodles and masks, among other items. The relief kits will be handed out to people who isolate themselves due to possible infection of the new coronavirus. [YONHAP]

The confirmation of Patient No. 28 has increased worries in the country as she was last in contact with an infected patient, Patient No. 3, 17 days ago, and the incubation period of the coronavirus has been known to be 14 days.

Officials at the Korean Centers for Disease Control and Prevention (KCDC), however, stressed Tuesday that the latest case doesn’t mean the incubation period of the virus could be longer than initially estimated, adding they believe Patient No. 28 did contract the virus within 14 days of meeting Patient No. 3, but barely showed any symptoms - which is why health officials didn’t bother to test her any earlier while she was quarantined.

KCDC officials said Patient No. 28 is thought to have gotten the disease from Patient No. 3, a 54-year-old Korean acquaintance, before she was quarantined in his home in Goyang, Gyeonggi, since Jan. 25.

Jan. 25 is when Patient No. 3 reported symptoms of the virus to health authorities and was transferred to a government-designated hospital for isolated treatment. He was confirmed on Jan. 26.

CCTV footage showed they had not left the house since Jan. 26.

According to the KCDC, both showed no symptoms of the virus during their quarantine period. Before ending their isolation period, both took a virus test last week. Patient No. 28 was tested last Saturday, but results showed she was on the “boundary line of negative and positive.” She took two more tests - on Sunday and Monday - and finally, tested positive Monday, the KCDC said.

Patient No. 28 is now receiving treatment and is in quarantine at Myongji Hospital in Goyang.

While the mother’s test results also came out negative Sunday, health officials said she was still quarantined at her home.

“Patient No. 28 tested positive, but it’s more like a positive close to a negative,” a health official said Tuesday. “That means she has a really tiny amount of the virus in her body.”

Lee Wang-jun, CEO and chairman of Myongji Hospital, said he expects Patient No. 28 to be discharged from the hospital within the week.

“She spent time with Patient No. 3, so she must have been infected pretty early on. But even so, she’s young and healthy, which is why she didn’t manifest any symptoms and couldn’t feel them at all,” said Lee. “That means even if you’re infected by the virus, you may not feel any symptoms.”

Among Korea’s 28 patients, four have been discharged from the hospitals after making full recoveries, said the KCDC. Outside Korea, health officials said Monday that the government was informed by Beijing and the World Health Organization that three Koreans living in China’s Shandong Province have contracted the disease and were receiving treatment at a Chinese hospital, marking the first time that a Korean national in China was reported to have been infected.

In one of its latest measures to curb the outbreak, the KCDC said Tuesday that it formally advises Korean nationals not to travel to six countries, other than China, which have the most confirmed cases: Japan, Thailand, Vietnam, Singapore, Malaysia and Taiwan.

The advisory from the KCDC, which is affiliated with the Ministry of Health and Welfare, was not a travel warning issued by the Foreign Affairs Ministry. Under the Foreign Ministry’s four-tier travel warning system, China’s Hubei Province is marked the second-highest level of “withdrawal recommendation,” while the rest of China, Hong Kong and Macao are marked the third-highest of “travel restraint.”

Starting today, the KCDC also said people arriving in Korea from Hong Kong and Macao will be subject to stricter quarantine screening, like those that are currently applied on visitors arriving from China. People will now be required to provide their contact information and the address they will be staying at in Korea to local officials, so they can be easily tracked down. They will also have to fill out a questionnaire asking about their health conditions and go through a more thorough procedure to check their body temperatures.

A KCDC official said Hong Kong was seeing more cases of the coronavirus spreading among communities, and that many people from China’s Guangdong Province were entering Korea through Macao, such as patients No. 26 and 27, who were confirmed to be infected on Sunday.