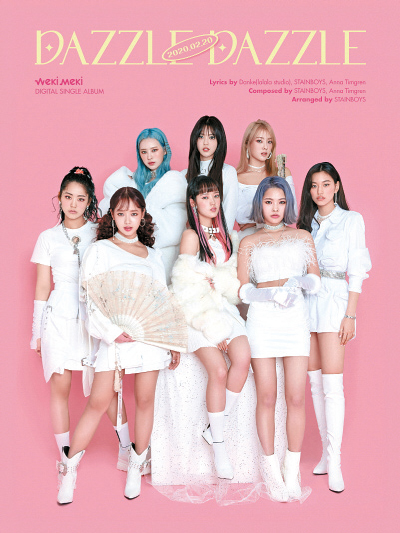 The agency released a teaser image for the single on Tuesday through its official social media channels, showing the girls in variations of white outfits against a peachy pink backdrop.

“Dazzle Dazzle” is a collaboration between Anna Timgren - who has written numerous girl group hits for GFriend, Twice and Chungha - and Stainboys - who have worked with singer BoA and girl group Momoland.

“Dazzle Dazzle” is the group’s follow-up to its EP “Week End LOL” and also the first release since member Choi You-jeong took a break from the group due to health issues last October.

“We ask that you support the eight-member group, including Choi You-jeong, and their explosive energy,” the agency said.

Weki Meki debuted in August 2017 with the EP “WEME.” Members Choi and Kim Do-yeon made their music debut through the project girl group I.O.I as the result of the first season of Mnet’s audition program “Produce” in 2016.