Food delivery beats digging a ditch, and it can pay well

Food delivery beats digging a ditch, and it can pay well 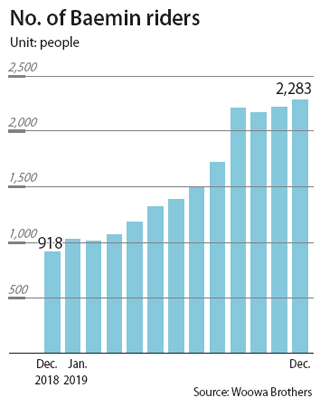 Delivering food by motorcycle, or on foot, appears to be a popular vocation these days.

An average of 2,600 people a month are signing up to work for Baedal Minjok, a food delivery app run by Woowa Brothers.

Currently Woowa Brothers employs 2,283 Baemin riders, who work directly for the company, and has a list of 14,730 Baemin connectors, part-time delivery workers available at odd hours of their choosing.

In November, the company received 524 telephone inquiries from prospective Baemin riders and connectors. This figure suddenly jumped in December to 1,119.

“On some days, we receive more than 400 phone calls asking how to work as a deliveryman,” said Kim Ki-mean, who heads the company’s team that oversees delivery hires. “Phone inquiries about being a Baemin connector are so overwhelming that we’ve put out guides and information on part-time job search websites and social media.”

For Baemin connectors, the job has its perks that other part-time gigs can’t offer. They don’t have to work fixed shifts. Instead, their working hours solely depend on whether they choose to turn on the mobile app that allocates them with delivery work. The app can be turned off whenever they want.

Woowa has some connectors working full-time jobs and then logging onto the app two to three hours before they go home. Baemin riders use motorcycles, while connectors can choose from a variety of options, from walking to riding a scooter.

According to Woowa, its connector part-timers earn a monthly average of 1.6 million won ($1,400). The hourly average is 13,000 won. This is roughly 51 percent higher than the legal minimum wage currently set at 8,590 won an hour - which is what’s typically offered for part-timers engaging in manual labor.

Food delivery apps, which bring restaurant dishes to the doorstep, were used by more than 25 million Koreans last year - up from 900,000 in 2013, according to data from the Fair Trade Commission. Hana Financial Investment estimates Korea to be the world’s fourth-largest market for food delivery services in a December report, with the market around $6 billion.