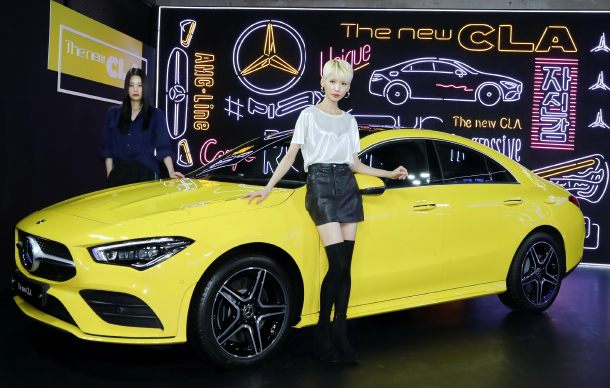 Models pose with the latest Mercedes-Benz CLA at an event held in Seongdong District, eastern Seoul, on Wednesday. [YONHAP]

Mercedes-Benz Korea released two new sedans Wednesday from its A-Class and CLA Coupe lines, including the German automaker’s most affordable sedan so far.

The models are the first batch of sedans released by the company this year. Last month, it vowed to present 15 new vehicles, including nine new models and six face-lifts.

Sedans take up an important part of sales in Mercedes-Benz’s domestic portfolio. With the Wednesday releases, the Mercedes-Benz sedans sold in Korea now include the A, C, E-Class, the CLS and S-Class lines.

“I would say they’re the preferred group of cars for our customers. C, E-Class, CLS and S-Class are the four model lines which account for 30 percent of our sales on a world-basis,” Mercedes-Benz Korea President and CEO Dimitris Psillakis said during a Wednesday press event in Seongsu, eastern Seoul.

“But Korea is even more advanced. These four model lines account for 75 percent of our sales, meaning our sedans are very attractive for Korean customers,” Psillakis said.

With a sporty design and equipped with the German carmaker’s latest infotainment technology, both sedans are targeted toward the country’s young millennials.

The new A-Class model is the first-ever sedan in the lineup that was exclusively composed of hatchback vehicles. It’s offered in two variations: the A 220 Sedan and the A 250 4MATIC, which differ according to engine output. The domestic launch comes a year and a half after the A-Class sedan was first revealed in the 2018 Paris Motor Show.

The line’s first sedan is 130 millimeters (5 inches) longer than the previous A-class hatchback and has trunk capacity 35 liters (9 gallons) bigger. The two A-Class sedans A 220 and A 250 4MATIC are equipped with four-cylinder petrol engines that offer up to 190 horsepower and 224 horsepower, and 30.6 kilogram-meters and 35.7 kilogram-meters of torque, respectively.

The CLA Coupe sedan released Wednesday is the second-generation model. It’s powered by a 2.0-liter, four-cylinder gasoline engine with 224-horsepower output and 35.7 kilogram-meters in peak torque. The CLA Coupe sedan 250 4MATIC is worth 55.2 million won.

Both sedan models are applied with the MBUX system, short for “Mercedes-Benz User Experience,” which allows drivers to control temperature, lighting and music, and to make calls via voice command. The second-generation CLA Coupe sedan is the lineup’s first to include the system. It was first introduced to Korean models starting with the GLC sedan, released in October.