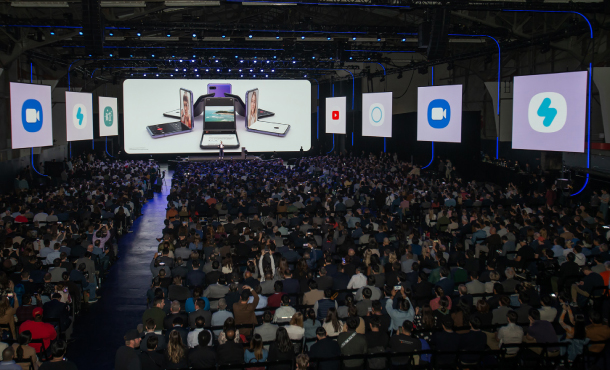 An image of Samsung Electronics’ latest foldable smartphone, the Galaxy Z Flip, appears on a screen at an unpacking event held in San Francisco on Tuesday. [SAMSUNG ELECTRONICS]

At a launch event in San Francisco Tuesday, Korea’s top tech company revealed a trio of Galaxy S20 phones with souped up cameras and processors, and the Galaxy Z Flip, a clamshell-style foldable phone that the tech giant hopes will outperform its ill-fated Galaxy Fold. The Z Flip, which folds in half to form a perfect square, is scheduled to hit the market on Feb. 14 and the three new Galaxy models - the S20, S20+ and S20 Ultra - on March 6.

The tech giant said ultra-thin glass covering on the screen will make the Z Flip more resistant to scratches than the Fold, which was delayed for several months due to reviewer revelations that the phone’s screen easily broke.

The Z Flip’s $1,380 (1.65 million won) price tag is a lot cheaper than the Fold’s $2,000 and prices for other new foldable models like Motorola’s Razr, reflecting Samsung’s determination to popularize the new type of smartphone.

Describing the Z Flip as “the first in the Z series,” Samsung said that it will keep building the foldable category.

“The Galaxy Z Flip is an important next step as we look to build the foldable category by bringing to consumers a new form factor, new display and, most importantly, a new kind of mobile experience,” said Roh Tae-mun, the new head of Samsung’s mobile communications business, who presented the model during the launch event. 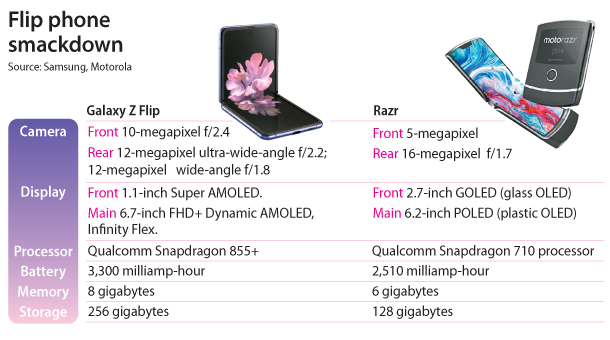 “It seems that Samsung put design and portability first over functions to push for broader adoption of the foldable phone category,” said Cho Chul-hee, an analyst at Korea Investment & Securities.

The Z Flip runs on a Qualcomm Snapdragon 855+ processor, a generation below the most current such chip, the Snapdragon 865.

The specs of its cameras are relatively modest with two 12-megapixel cameras in the rear and a 10-megapixel interior camera. The Z Flip, which comes in three colors - purple, black and gold - is only available for LTE networks, not for 5G.

The Motorola Razr, launched in January, is equipped with the older Snapdragon 710 processor and a 16-megapixel main camera.

Still, the smartphone maker insists the model will have special appeal to users since its unique shape allows special web-browsing or video-watching modes.

In Flex Mode, the display automatically splits into two four-inch screens. This feature could be useful when a user watches a YouTube video on the top screen while looking over comments or reading descriptions on the screen below.

Of the three S20 models, the S20 Ultra has the largest display at 6.9 inches, the highest resolution camera (108 megapixels), a telephoto lens and a 40-megapixel selfie camera.

All of the S20 series run on Snapdragon 865 chips and come in 5G for Korea and LTE and 5G for markets abroad. Samsung also incorporated 8K resolution into the S20 series’ video functions. 8K is the highest resolution currently available for retail televisions.