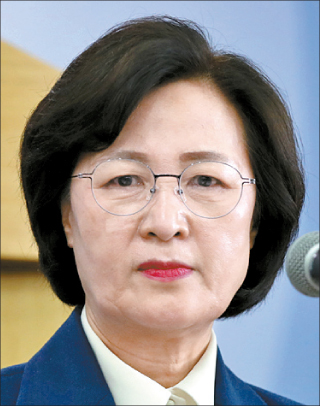 Justice Minister Choo Mi-ae’s son was let off the hook when he went AWOL from the military in 2017, a former fellow soldier told the JoongAng Ilbo on Tuesday.

In 2017, Choo was chairwoman of the ruling Democratic Party (DP), and her son was doing his military duty in the Korean Augmentation To the United States Army, or Katusa, for the 2nd Infantry Division of the U.S. 8th Army. The source said Choo’s son failed to return to his unit in time after a medical leave, and a senior officer suddenly granted an extension.

According to sources familiar with the incident, Choo’s son took a 10-day medical leave in June 2017. He extended the leave for another 10 days.

When his extension was nearing its end, Choo’s son applied for another, but the master sergeant in charge of the unit didn’t approve it. The rejection was made in front of other senior officers of the unit.

“I was on duty [the night of his scheduled return], and I received a report from a sergeant in charge of roll call at 8:50 p.m. that he had not returned to the base,” the source told the JoongAng Ilbo. He phoned Choo’s son on his personal mobile phone, the number of which was listed in the military emergency network.

“You know that your medical leave was not extended. You are now reported as absent without leave [AWOL]. Where are you now? Can you return to the base within an hour?” the source said he told Choo’s son.

According to the source, Choo’s son told him, “I am at home in Seoul.” After the source ordered him to return to the base immediately, Choo’s son said he would.

About 20 minutes after their phone conversation, a captain who was not known to the source visited the office and told the source to change his report. “I approved the leave, so change his status to a soldier on leave, not AWOL, in your report to the upper chain of the command,” the captain was quoted as saying by the source.

The source said he did not know the captain’s name.

“I have never known a case in which a decision made by the officer in charge of personnel management during a meeting was reversed by a captain,” the source said.

A military official told the JoongAng Ilbo that a commander has discretion to extend a leave when a soldier has special circumstances. “It could be possible that a decision made among the senior officers was not handed over to the soldiers properly,” he said. “But if the extension of the leave was not done before his scheduled return at 8:50 p.m., it could be grounds for punishment.”

During her confirmation hearing at the end of last December, Choo faced questions from opposition lawmakers about her son’s military service. Rep. Kim Do-eup of the Liberty Korea Party said he had received a tip that after Choo’s son was reported as being AWOL, Choo telephoned the military and a captain from the upper chain of command had extended his leave.

At the hearing, Choo said her son had a knee problem, so he consulted with the military and received more days of leave to be admitted to a hospital. “He didn’t have to go into the military [because his health would have given him an exemption], but he volunteered because his mother was a public figure,” she said.

The issue was raised again during Choo’s first press conference as justice minister on Tuesday, but Choo refused to discuss it.

The JoongAng Ilbo asked the Justice Ministry about the source’s accusation, but the ministry refused to answer because “the matter concerns privacy of the minister, and an investigation is currently ongoing about the allegation.” The Seoul Eastern District Prosecutors’ Office is investigating the case.