Daegu hopes to cash in on homie Bong and ‘Parasite’

Daegu hopes to cash in on homie Bong and ‘Parasite’ 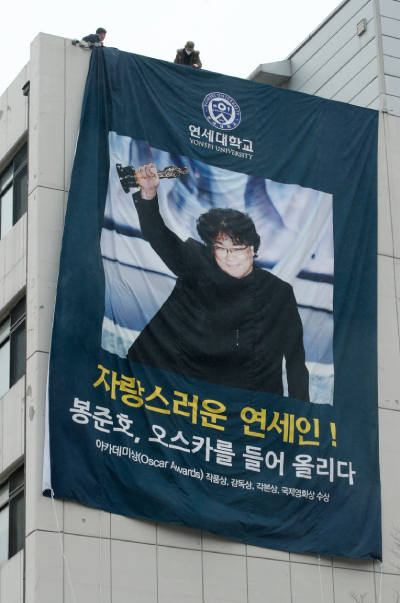 Each time “Parasite” won an Academy Award in Los Angeles Sunday, the loudest applause came from a city across the Pacific that isn’t particularly well-known.

Daegu, Korea’s fourth most populous city, is where “Parasite” director Bong Joon-ho was born in 1969. He spent his early childhood there before moving 238 kilometers (148 miles) north to Seoul with his entire family.

One idea is currently on the table: throwing open the house where Bong was born to the public. Officials at the Daegu Metropolitan Government Office said Wednesday they were discussing ways to promote the city as the director’s hometown. Aside from possibly exhibiting his childhood home, other ideas include creating a Bong-themed street or establishing a museum or memorial hall depicting his life’s journey to Hollywood success.

Daegu Mayor Kwon Young-jin said Tuesday in a meeting with senior aides that he was proud to call Bong “Daegu’s son” and that it was only right to let the world know that the Korean director was born there.

“I think we should all use our personal networks to think of ways to find a link to director Bong,” Kwon said.

Bae Young-shik, who is hoping to run in those districts, said it was crucial to “eternally celebrate and pass on” Bong’s “great accomplishments.” To do so, he promised to help create a movie-themed road, restore Bong’s old house and erect a statue of Bong if he gets elected. Other political contenders pledged to create various sorts of memorials to the director.

According to the Daegu city office, Bong was born in Bongdeok-dong, Nam District in Daegu in 1969, after which he attended Daegu Namdo Elementary School in the adjacent Daemyeong-dong. When he reached the third grade of elementary school, he and his family moved to Seoul. He graduated from Yonsei University with a bachelor’s degree in sociology. His father was a college professor in Daegu who taught in the arts.