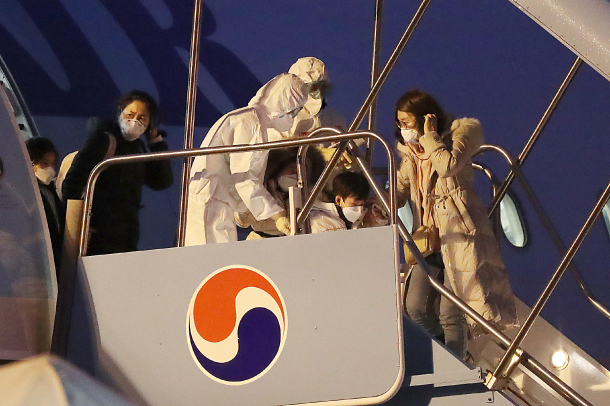 Korean nationals and relatives airlifted from Wuhan, China, the epicenter of the coronavirus outbreak, disembark from the third chartered flight after it landed at Gimpo International Airport in western Seoul Wednesday morning. [JOINT PRESS CORPS]

Officials at the Korea Centers for Disease Control and Prevention (KCDC) said a total of 147 people were airlifted from the epicenter of the new coronavirus, mostly Korean nationals who didn’t get on the first two chartered flights, as well as their Chinese family members.

Only Korean nationals were allowed to board the first and second flights earlier this month, and many people with Chinese family members refused to leave.

The KCDC said 79 people on the third flight were Korean nationals, 66 Chinese, one American and one from Hong Kong.

Five people who showed symptoms of the virus upon their arrival at the Gimpo airport were immediately taken to the National Medical Center in Jung District, central Seoul, for further examinations.

Two kids, aged 11 years old and 15 months, were sent to the same hospital to be with their parents, even though they did not manifest any symptoms.

The remaining 140 were sent to the state-run Joint Forces Military University’s Korea Defense Language Institute in Icheon, Gyeonggi, where they will remain for 14 days, the incubation period of the virus.

A team of 40 people fielded by the government, including doctors, nurses, paramedics, interpreters and psychological therapists, will be stationed at the language institute for assistance. Their health conditions will be checked twice a day.

If they show any symptoms, they will be transferred to a nearby government-designated hospital for isolated treatment, said the Ministry of the Interior and Safety. No additional case of the coronavirus was reported in Korea Wednesday, maintaining the number of infected patients at 28.

The KCDC said three more patients - Patients No. 3, 8 and 17 - were discharged Wednesday after full recoveries, following four patients previously discharged. Twenty-one people are currently being taken care of in government-designated hospitals, all in stable condition.

Tedros Adhanom Ghebreyesus, director-general of the World Health Organization (WHO), said in a press conference Tuesday that a vaccine could be ready in 18 months and that the coronavirus will be named Covid-19, taken from the words “corona,” “virus” and “disease,” with the numeral “19” representing the year 2019, when the outbreak was first reported to the WHO on Dec. 31.

With Koreans taking matters into their own hands to avoid infection - by wearing face masks, refraining from public activities and staying out of places that infected people have visited - owners of stores and restaurants are complaining about dwindling sales.

The owner of a noodle restaurant in Songpa District, southern Seoul, said Wednesday that his daily customers fell by nearly 80 percent after news broke that Patient No. 19 ate at his place on Feb. 1.

The local health community center dropped by to spray disinfectants on Feb. 6, a day after Patient No. 19 tested positive for the virus, but that didn’t do much about jitters from customers.

“I ran this place for 26 years, and all of a sudden, it’s like it’s been struck by lightning,” said the owner, who refused to reveal his full name. “I was planning to pass on the business to my son, but if the current state continues, I’ll have to shut it down.”

Hotel Newv in Gangnam District, southern Seoul, was faring no better. The hotel was among several places Patient No. 3 was reported to have visited after he manifested symptoms of the virus.

After the government revealed Patient No. 3’s travel route on Jan. 26, business has plummeted.

The general manager of the hotel said many reservations were cancelled after the government’s disclosure, and that currently, only about 20 rooms out of 150 were occupied.

“I think we’ve seen about $9 million won [$7,600] in losses so far, but when you think about the longer-term impact and how the case influenced our image, the amount is far bigger,” said the general manager.