Lotte Shopping to shut 30% of its stores

Lotte Shopping to shut 30% of its stores 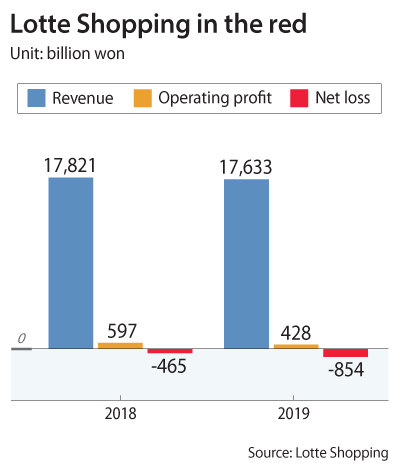 Lotte Shopping will close some 200 department stores and large supermarkets, an echo of the closing of brick-and-mortar retail stores in the United States.

The retail unit of Lotte Group said Thursday it will shut around 200 or 30 percent of over 700 branches of Lotte Department Store, Lotte Mart, Lotte Super and LOHB’s, a drug store chain, to cut losses.

“The focus of our business strategy in 2020 is a heavy downsizing to enhance efficiency and profit,” Lotte Shopping said in a statement.

The move came as brick-and-mortar stores and supermarkets lose out to e-commerce players offering lower pricing. Bruised by the rise of online retailers like Amazon, major department stores in the United States including Macy’s and JCPenney have closed physical stores on a large scale.

“The food sections at underperforming small- and mid-sized department stores will be changed into supermarkets selling fresh groceries,” the company said.

“The fashion zones at [Lotte] Mart will offer items selected by buyers from department stores who are responsible for purchasing designer brand products,” it said.

Kang Hee-tae, head of Lotte Shopping, admitted the unit faces challenges due to tough market conditions and poor performances by its major shops.

“The top priority at Lotte Shopping is to resolve fundamental problems and deliver clearly positive result,” Kang said in a statement.

Lotte will also transform its identity from an old-fashioned retailer to a “service company” offering tailored services through big data analysis instead of using resources to operate hundreds of branches.

The announcement followed poor results for 2019.

The company also blamed a decline in visitors from China and hikes in the minimum wage for the poor results.

The supermarket business was the worst segment last year.

Lotte is not alone in being challenged by online shopping.

Emart, a discount supermarket chain run by Shinsegae, announced last year that it will downsize its Electro Mart outlets, which specialize in tech gadgets, and Boots drugstores while shutting down quirky chain Pierrot Shopping, modeled on Japan’s Don Quijote chain.