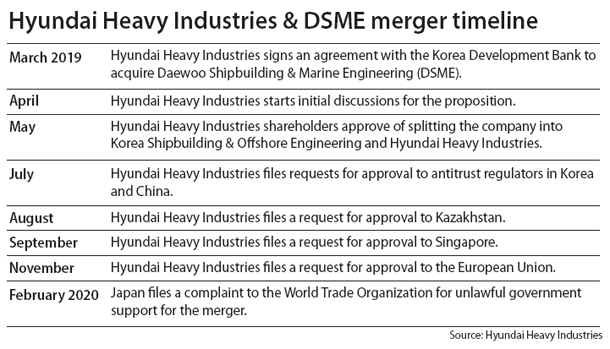 A massive proposed merger of two Korean shipbuilders faces hurdles overseas, as other countries with a stake in the industry have expressed concerns about reduced competition and alleged subsidies from the Korean government in support of the deal.

The proposed deal between Hyundai Heavy Industries and Daewoo Shipbuilding & Marine Engineering (DSME) would create the largest shipbuilder in the world with a 21 percent market share. The deal, however, must first win approval from global antitrust regulators and governments.

The latest issue was raised from Japan that took an issue with the Korean government providing financial aid in support of the mega-merger deal.

Japan on Jan. 31 filed a new complaint against Korea with the World Trade Organization (WTO), alleging that the Korean government is providing subsidies to its shipbuilding industry in support of the deal.

The complaint was circulated among WTO member states Monday, the trade organization said on its website.

It is the second time that Korea’s neighboring country filed a request to the WTO with concerns of support measures for Korean shipbuilders.

According to the latest request for consultations, Japan took issue with the KDB’s measure to exchange its 59.7 million shares of DSME, valued at 2.09 trillion won, with 9.12 million won of convertible preferred shares and 6.1 million won of common shares of Korea Shipbuilding & Offshore Engineering (KSOE).

In late May, Hyundai Heavy Industries shareholders approved the splitting of the company, which was the first step toward acquiring DSME.

They voted in favor of splitting the shipbuilder into two entities: KSOE, an intermediate company responsible for investment and financial support for its affiliates as well as research and development, and Hyundai Heavy Industries, the operating company.

Japan also objected to the KDB’s guarantee to provide an additional 1 trillion won of financial support for Hyundai Heavy Industries in the event of fund shortages.

The request initiates a formal dispute process between Korea and Japan within the WTO. If the bilateral consultations fail to resolve the dispute within 60 days, Japan could request a panel to adjudicate the case.

Japan declined to push the issue further after the 60-day period expired on its first complaint.

The Ministry of Trade, Industry and Energy responded Wednesday that Korea has abided by international norms, calling Japan’s argument baseless.

Some industry sources point out that Japan is picking a fight with Korea, as the merger could threaten Tokyo’s already dwindling shipbuilding industry.

According to market tracker Clarksons Research, Japan’s market share in global shipbuilding orders fell from 28 percent in 2015 to 13 percent by the end of last year. During the same period, Korea rose from about 30 percent to 37 percent.

If Hyundai Heavy Industries and DSME successfully merge, Japanese shipbuilders could face fiercer competition in the global market. And for that reason, sources say Japan is doing what it can to ensure the merger makes less of a threat to the global industry and itself.

Some are also worried about the merger falling apart as the latest complaint signals that Japan is going to vote against the deal.

Hyundai Heavy Industries submitted the proposal for the acquisition to the European Union antitrust authorities in mid-November. To be finalized, the deal needs to be approved by antitrust regulators in Korea and five other countries.

If any of the authorities veto the deal, it could fall apart and stop there.

Hyundai Heavy Industries said the latest complaint is unrelated to the merger being approved by Japan’s antitrust regulator, as the issue was raised by a different agency, Japan’s Ministry of Land, Infrastructure, Transport and Tourism.

But others consider the complaint alarming, saying it could very well be representing the official opinion of the Japanese government.

And Japan isn’t the only country to take issue with the proposed merger.

The European Commission announced in December it is investigating the deal, which it said could “reduce competition in various cargo shipbuilding markets.”

Some were alarmed by the commission voicing a critical initial view of the proposed transaction. But some have forecast that the EU will sign off on the deal, with a set of conditions that would restrict the market share of the merged entity.

The deal could also still be approved as is, despite the European Commission’s concerns.

The antitrust regulator was initially skeptical when reviewing STX Offshore & Shipbuilding’s proposed acquisition of Aker Yards in 2007 but ultimately approved the deal after finding that it would not seriously threaten market competition.