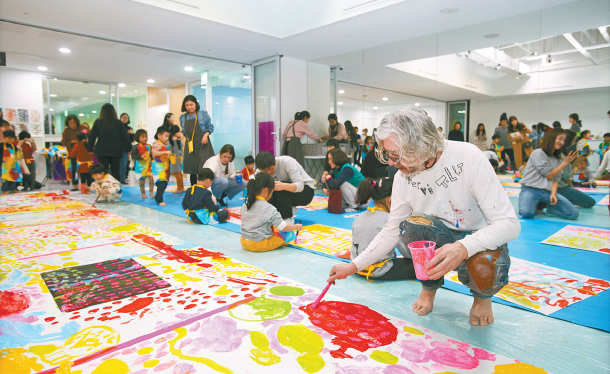 Food, carbonated beverages and beer have not been allowed in the Sejong Center for the Performing Arts located in Gwanghwamun, central Seoul, since it opened in 1978, 42 years ago.

But recently the center has made a special exception for those who want to bring in some beer to enjoy while watching a performance.

The Sejong Center, known as a prestigious venue where only the most acclaimed musicians can take the stage, is often synonymous with tradition and strict etiquette rules, but the venue partially lifted its ban on beer when indie musician Seong Jin-hwan held his “Such a Nice Winter” concert late last year at S Theater, one of the halls at the Sejong Center.

Each concertgoer was allowed to bring up to two cans of beer. Canned craft beer was also on sale in the lobby on the day of the concert.

The decision to allow beer to be served at the Sejong Center was very exceptional given the culture at most local performance spaces that strictly prohibit food inside the theater even if the food is from within the venue.

It was the first-ever attempt made by a public performance hall to allow something other than a bottle of water inside the theater.

The rule is a bit lax at Charlotte Theater in Songpa District, southern Seoul, which allows beverages with caps on them inside.

Pricey tickets often accompany rigorous rules, and many people visit cultural venues in search of entertainment only to find themselves being overwhelmed by strict rules and regulations.

“Performance venues overseas function as a celebratory place or a community center for locals when there are no scheduled performances. But Korea’s performance halls are not easy to access for ordinary citizens, mainly because etiquette rules were set too high by the first generation artists who studied overseas and learned high-end fine arts. They are the ones who dominated the industry,” said Ahn Ho-sang, the dean at the graduate school of fine arts at Hongik University. 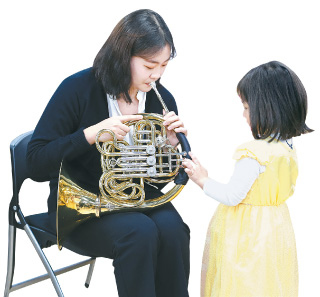 But things are beginning to change as such venues work to lure young visitors by loosening some of their rules around the world.

For example, some people in Britain pre-order snacks through a smartphone app and get food and beverages - be it wine or beer - delivered to their seats.

Classical performances held overseas are more like a party. In between and after the concert, audience members enjoy alcoholic beverages and snacks in lobbies. For them, the concert is an opportunity to mingle with fellow concertgoers and connected over their shared experience.

“Half Six Fix,” a program available at the London Symphony Orchestra that started in 2017, allows young people to operate their smartphones freely and sip alcohol while watching performances.

“As a way of expanding the audience and encouraging networking among them, overseas theaters capitalize on food and beverage as a medium,” added Han.

Riding the wave of change, Sejong Center and other similar venues are easing their rules in the hope of attracting new traffic.

This year, Sejong is going a step further from just serving beer.

Left: Gyeonggi Arts Center, in Suwon, Gyeonggi, stages the play “The Star” by Alphonse Daudet for those who are visually impaired by having sound effects specialists on stage. Center: Sejong Center for the Performing Arts, located in Gwanghwamun, central Seoul, allowed some of its audiences to drink beer at a concert last year. Right: “Saturday Gugak Fairy Tales,” a program for children, is available at the National Gugak Center located in Seocho-dong, southern Seoul. [EACH THEATER]

At “Contemporary S,” a dance performance scheduled for July, audiences will be able to bring their own beer while buckets of popcorn and soft drinks will be available at “Harry Potter and Goblet of Fire in Concert” in August and November.

Another concert in November, “LoL Concert,” in which the music from the online battle game League of Legends (LoL) will be played by an orchestra, concertgoers will be able to use their smartphones throughout the concert.

Toddlers, once shunned by performance venues, are now being welcomed with open arms, too.

The “Sejong Children’s Series Five, One” program has been created by the Sejong Center for toddlers who are under 36 months old. The young visitors can explore colors, shapes and sounds with the dance moves from choreographers and lines from actors.

“We intend to expand the audience base to moms in their 20s and 30s who are exhausted from raising their children,” said Oh Jeong-hwa, the head of the performance planning department at the Sejong Center.

A children’s lounge has recently been added to the Seoul Arts Center (SAC) located in the Yangjae neighborhood of Seocho District, southern Seoul.

The 1101 Museum, as the lounge is called, opened its doors in January and promotes itself as a space for young visitors, from infants to 7-year-olds.

The name comes from the tagline “the art you experience at 1 year old lingers within you until you turn 101 years old.”

It costs 20,000 won ($16.90) to leave a child at the lounge for two hours as the facility is run by a private enterprise, but the lounge has been packed since its opening day. Children can read books and work on group drawings that will later be put on display.

A 50 percent discount is given to those who have tickets for any performance held at the SAC, but additional fees are charged for participating in activities.

Currently, the lounge is run by a workshop program designed by French artist Herve Tullet, and the SAC will change the program every six months by inviting new artists.

“Women in their 20s and 30s used to be active consumers of cultural performances, but they grow apart from cultural events as they get married and raise children. I wanted those women to be here again. I also wanted their children to enjoy arts from a young age,” said Yoo In-taek, the president of the SAC.

The National Gugak Center located in Seocho District has had a head start in operating programs for children.

Since 2016, the center for traditional Korean music has offered “Saturday Gugak Fairy Tales” for children older than 12 months old with the aim of developing future audiences.

With a wide repertoire that combines fairy tales with gugak, or traditional Korean music, nearly every performance gets sold out.

Due to the program’s resounding success, the gugak center increased the number of shows from 27 to 40 last year.

The Seoul Philharmonic Orchestra, the nation’s top symphony orchestra, has also jumped on the bandwagon. The orchestra launched “Concert for Kids” last year.

The concert is for families with children over 36 months old. It is a classical concert that also offers a session where children can touch and pluck the strings of classical instruments.

The first concert held last May sold out in less than 30 minutes.

Some theaters are giving up on their identities to reach wider audiences.

Making cultural venues more accessible to people with disabilities is another notable change being made in the entertainment community.

SAC will create a new hall that will be friendly for audiences who are physically and mentally challenged. Performers from underprivileged families will be able to stage shows there as well.

The National Theater of Korea operates a wheelchair accessible shuttle bus between the theater and a nearby subway station.

The Sejong Center beefed up its overall facilities last year to make them more accessible to people with disabilities. More ramps were added for wheelchairs while revolving doors were changed into automatic ones for the convenience of people who use wheelchairs.

Information desks were newly created so that staff working there can make eye contact with all the visitors, including those in wheelchairs.

Enhancing the accessibility of cultural venues is also a key task for theaters overseas.

London-based charity Attitude is Everything offers disability equality training programs for people working in the performing arts. The program is designed to improve the overall viewing environment for people with disabilities.

About 500 people participate in the program every year.

The charity also issues an annual report which looks into the accessibility of theaters. According to the State of Access report published in 2018, 3.3 million people with disabilities visit cultural venues, and an individual spends 48 pounds ($62) on tickets and 30 pounds on food and beverages as of 2017 for a single trip to a theater. To put it another way, the purchasing power of people with disabilities should be taken into consideration.

With better facilities for those with disabilities opening up, relevant shows are on offer, too.

Gyeonggi Arts Center, located in Suwon, Gyeonggi, staged a play called “The Star” by Alphonse Daudet for those who are visually impaired last November.

The play was presented with 60 speakers throughout the venue along with Foley artists who create sound effects.

Sejong Center will stage the barrier-free musical “My Left / Right Foot” in November, too.

Co-produced by National Theatre Scotland and Birds of Paradise Theatre Company in Britain, the musical is reportedly a hilarious piece written and directed by Robert Softley-Gale, who himself has cerebral palsy.

Subtitles, sign language interpretation and voice descriptions will be provided for the audiences.