Airlifted Koreans get the all clear

Airlifted Koreans get the all clear 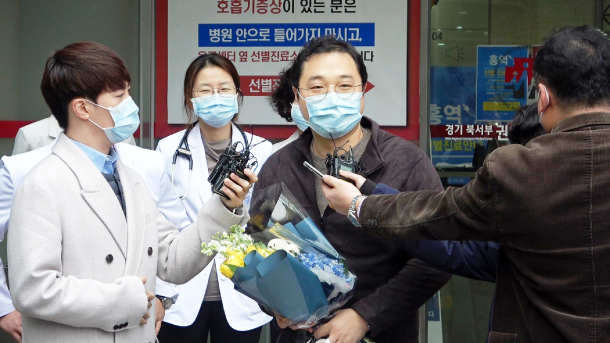 Patient No. 17 leaves Myongji Hospital in Goyang, Gyeonggi, Wednesday after what doctors called a full recovery from the new coronavirus. [MYONGJI HOSPITAL]

All five people who reported symptoms of the new coronavirus after getting airlifted from the Chinese city of Wuhan earlier this week have tested negative, local health officials said Thursday.

Upon seeing their test results, officials from the Korea Centers for Disease Control and Prevention (KCDC) said the five returnees were sent to the state-run Joint Forces Military University’s Korea Defense Language Institute in Icheon, Gyeonggi, where they will be staying for 14 days, the incubation period of the virus.

Korea’s infections remained at 28 Thursday, with the last patient having been confirmed Monday.

The five people from Wuhan who were recently tested for the virus were among 147 Korean nationals and their families evacuated from Wuhan, the epicenter of the new coronavirus, Tuesday night on Korea’s third chartered flight. The plane landed at Gimpo International Airport in Gangseo District, western Seoul, Wednesday morning.

Five returnees exhibited symptoms of the virus upon their arrival at Gimpo airport, and were whisked off to the National Medical Center in Jung District, central Seoul, for further examinations.

Two children, aged 11 years old and 15 months, were sent to the same hospital to be with their parents, even though they were not showing any symptoms. The remaining 140 were sent to the language institute in Icheon Wednesday. The KCDC said the test results for the 142 people all came back negative on Thursday.

That, however, doesn’t entirely eliminate the chances they won’t test positive during their incubation period. Korea’s 24th coronavirus patient, a 28-year-old Korean man airlifted from Wuhan on the first chartered flight, manifested symptoms of the virus on Feb. 6, a week after he left the Chinese city, and tested positive on Feb. 7.

Patient No. 13, also a 28-year-old Korean man, was on the same plane as Patient No. 24, and he was diagnosed on Feb. 2, three days after leaving Wuhan. The government vowed to keep close tabs on the returnees by checking in on them twice a day for possible symptoms.

Among Korea’s 28 infected patients, seven have been discharged from hospitals, while the rest remain hospitalized, all in stable conditions, according to the KCDC. None have died, unlike China, which has reported at least 59,807 infections, 1,367 deaths and 5,984 recoveries so far.

Patient No. 17 was among Korea’s latest recoveries. The 38-year-old Korean national from Guri, Gyeonggi, had returned from a business trip to Singapore last month to attend a conference, when he received a call from his company days later that a Malaysian national who attended the conference had contracted the disease, and that he should be tested as well.

His results came back positive on Feb. 5, and he was hospitalized at Myongji Hospital in Goyang, Gyeonggi, for a week before getting discharged Wednesday.

As he left, the man told reporters that the virus wasn’t as bad as he imagined.

“After experiencing it myself, I don’t think the disease was as serious as I thought,” said Patient No. 17. “I think people can recover - though perhaps not easily - if they seek good medical treatment early on.”

In an email he sent to doctors and nurses at Myongji Hospital Wednesday, which was revealed to the press by the hospital on Thursday, Patient No. 17 expressed gratitude for all the medical staff for taking good care of him and making him feel at ease, saying he was especially impressed how a doctor escorted him all the way from the ambulance to his room on the fifth floor when he first arrived at the hospital.

“As I arrived at the hospital, wracked with nerves after getting diagnosed with the new coronavirus, the first impression I received from Myongji Hospital is that everyone was really kind,” he wrote in the email.

“Professor Kim [Moon-jung] conveyed some really warm words [when she first saw me], and escorted me to my room on the fifth floor, making sure I didn’t freak out or feel awkward. I remember that time the most.”