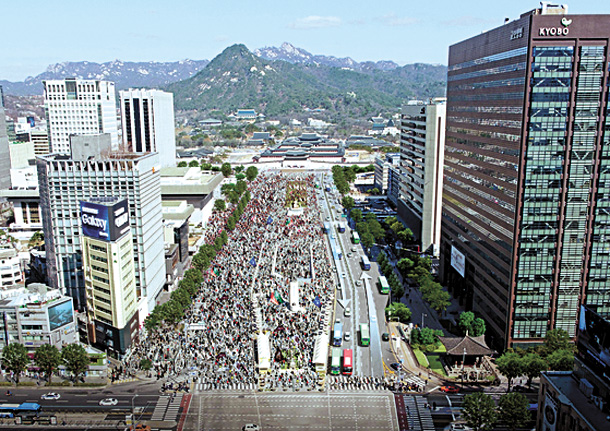 An artist's rendition of Gwanghwamun Square in central Seoul after renovations. The Seoul city government Thursday announced revisions to its earlier plan to renovate the area. [yONHAP]

The Seoul Metropolitan Government announced some revisions to its renovation plans of Gwanghwamun Square in central Seoul Thursday, nearly two years after facing a fierce backlash from the public and locking horns with the central government.

For now, Seoul said it would stick to its original plan of incorporating the four car lanes in front the Sejong Center for the Performing Arts into Gwanghwamun Square - but ditch another idea that involved rerouting roads in front of Gyeongbok Palace to also incorporate that area into the square.

The city government Thursday also put the brakes on a plan to restore an elevated platform in front of the entrance to Gyeongbok Palace, called woldae in Korean, saying it would discuss the matter further with the Cultural Heritage Administration.

The revisions were part of a 15-page press release Seoul issued Thursday about its so-called New Gwanghwamun Square Initiative. The release detailed the city’s efforts to hear how government officials and members of the public thought about the 2018 Gwanghwamun renovation plan.

In the release, the Korean capital acknowledged some lapses in its original idea but overall stressed that the public seemed to be on the same page with the city, suggesting that the Seoul government office wasn’t bulldozing the Gwanghwamun development plan despite public disapproval.

Based on a series of talks with Seoul citizens and government officials working in the Gwanghwamun area, as well as a survey of some 1,300 people living in the capital, the city office said the majority of the public agreed to the necessity of a renovation of the square, as well as the plan to alter the roads in front of the Sejong Center into pedestrian areas.

In April 2018, the Seoul Metropolitan Government Office unveiled plans to triple the size of Gwanghwamun Square in downtown Seoul at the expense of removing roads in front of the Sejong Center and creating a pedestrian plaza outside the gate leading to Gyeongbok Palace.

The 99.5 billion won ($84.2 million) project was supposed to expand the square by 3.7 times its size by 2021 on the grounds of enhancing “pedestrian connectivity” in the area and “restoring the historical identity of the space.”

Two months later, the Ministry of the Interior and Safety sent a notice to the city government requesting the plan should be reconsidered, citing a major concern on the feasibility of incorporating the road in front of the Sejong Center into the square and rerouting traffic.