Ryu Hyun-jin has arrived at his first spring training with the Toronto Blue Jays as an established veteran who doesn’t need much in the way of instruction. 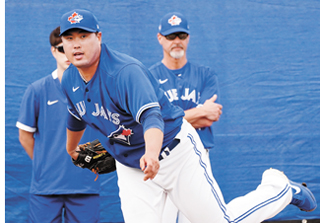 That leaves pitching coach Pete Walker with little to do - at least for now - other than to make sure the Korean pitcher settles in nicely with his new surroundings.

“Not really anything right now,” Walker told reporters Thursday when asked if he was going to approach Ryu, a former Los Angeles Dodger, with ideas for changes.

“[I’ve been] just talking to people in the Dodger organization, [trying to] understand what he likes to do and what kind of routine he’s used to,” Walker said, as pitchers and catchers had their first workout at TD Ballpark in Dunedin, Florida. “He’s a veteran pitcher, and he’s been around. So you want to make sure he’s comfortable doing his thing. We’re going to learn from him exactly what he’s like and then when the time comes, we’ll make suggestions. But for now, it’s just getting him as comfortable as possible, as soon as possible.”

Ryu pitched for the Dodgers from 2013 to 2019, punctuating that run with the National League (NL) ERA title and the runner-up finish in the NL Cy Young Award voting in his final year in Los Angeles. The Jays signed the free agent to a four-year, $80 million contract, the largest deal for a pitcher in franchise history.

Expectations are admittedly high for Ryu, who, barring injuries during spring training, will immediately become the Jays’ new No. 1 starter.

And with that comes some much needed stability for the Blue Jays, who went through a team-record 21 starters in 2019, en route to a 67-95 record.

“You get starters that are consistently taking the ball and going deep in the game, then you put everybody in better positions,” Walker said. “Your defense thrives off that kind of guy, and it gives you a real good feeling that you’re going to win a ball game that day. Hopefully, that carries over to the other guys.”

Walker, a former Blue Jays pitcher himself, said Ryu is someone who “just knows how to pitch.”

“He changes speeds well and effectively uses his fastball. Has a great breaking ball,” Walker said. “In this day and age, there are so many pitchers that are reliant on power. He knows how to finesse a guy and still beat him with a heater at times.”

The coach added that Ryu’s methodical approach to his game can rub off on his young pitching staff, calling the pitcher “a pro.”

“You can just watch him go about his work and watch his side session,” Walker said. “You can tell he has a game plan, and he knows what he wants to do each time he gets the ball. It’s good for younger pitchers to go see him work.”

Switching teams is only part of the change for Ryu. He’ll be moving from the NL West to the American League East, a division that often packs more offensive punch than any other division in baseball. Rogers Centre, the Blue Jays’ home, is much more of a hitters’ park than Dodger Stadium.

But Walker isn’t too concerned about Ryu, since he has a “tremendous changeup” that the coach thinks will be the equalizer.

“It’s new faces he’s going to be facing consistently, and they have to make the adjustments as well,” Walker said. “He knows how to change speeds and keep guys off balance.”

Ryu had his first bullpen session Thursday, making 33 pitches with Walker watching from behind the mound. The coach didn’t make a big deal out of the first one - “We’re not going to get too concerned about bullpens early with anybody,” he said - and he liked how Ryu looked comfortable throwing the ball.

“Our priority is to make sure he’s in peak form throughout the year,” Walker added. “We’re doing research and finding out what kind of program he’s had in the past, and making sure he’s comfortable with it and kind of stick to that plan. What’s worked in the past, we want to continue that.”

As important as on-field results may be, Walker said he wants Ryu to get to know his teammates better during camp, especially catchers.

“The biggest challenge, coming to the new team, is making sure catchers are on the same page,” he said. “We have an idea of what he likes to do. For [catchers] to get comfortable with him is always important. That’s pretty much what spring trainings are for.”