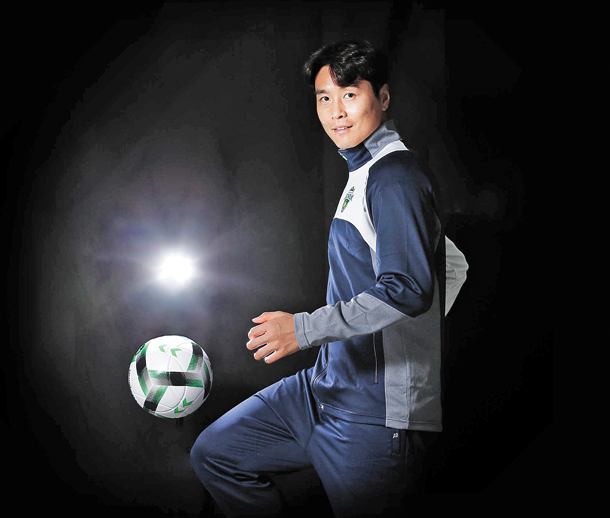 Lee Dong-gook of Jeonbuk Hyundai Motors will be turning 41 this year, but that doesn’t mean he’s ready to hang up his football boots.

“There aren’t that many players who played from the 1990s to 2020,” Lee said. “Since I’ve been playing throughout that entire time, maybe my game improved a little.”

Having made his professional debut with the Pohang Steelers back in 1998, Lee is about to start his 23rd season as a football player. As the oldest active player in the K League 1, one fan commented online that Lee is probably the only player in the entire league that competed at the 1998 FIFA World Cup in France and is still playing.

Lee joined the national football team as a 19-year-old. While the majority of his teammates that competed at the World Cup are still continuing their career in the world of football, they tend to be on the sidelines.

Some world famous former footballers like Brazil’s Ronaldinho and England’s Steven Gerrard, who now manages Scottish Premiership club Rangers, are both younger than Lee but have chosen to take a step back from the game.

“I can’t believe they are younger than me,” Lee said. “But since they play better football than I do [or did], I’ll consider them older.”

Through Lee’s 22-year football career, he has had his fair share of ups and downs. He first made his debut in the K League by joining Pohang, and throughout his career with the club, Lee scored 38 goals in 102 matches. But when he made an attempt to play in the European league - one season with Werder Bremen and two with Middlesbrough - he failed to perform, and seemed to be stuck in a rut after he returned from Europe and played for Seongnam FC, scoring only two goals in 10 matches during the 2008-09 season.

But the K League star got his groove back after transferring to Jeonbuk in 2009. Since then, Lee has consistently scored more than 10 goals every season to set a new league record for most career goals. He was able to continue his streak of double-digit goals for 11 straight seasons, as he scored nine goals throughout K League 1 matches and one in an Asian Football Confederation (AFC) Champions League match last year.

His record is beyond impressive as he’s been managing to continue such a streak despite his reduced playing time. With such performance, Lee once again re-signed a one-year contract with Jeonbuk when the 2019 season ended and the club has set its sights on winning K League 1 title for the third straight season.

“I’ve prepared well [for this season] physically,” Lee said. “This year is better than last year.”

Throughout his career, Lee’s been lucky when it comes to injuries and has a secret behind his impressive scoring streak.

“I pretend to be someone who doesn’t want to play football in front of the other team’s defender,” Lee said. “Then, all of the sudden, I would kick and run. I think that kind of breaks down the defender’s mental game.”

Of the 10 goals Lee scored throughout the 2019 season, he also had one of the most interesting of his career that left a lasting impression on the fans. During a match against the Suwon Samsung Bluewings on June 23, 2019, Lee scored a goal when Suwon’s goalkeeper’s kick hit Lee’s face. This painful but lucky goal allowed him to continue his record.

“I’ve been practicing to get rid of my fear of [getting hit by] the football over the past 20 years,” Lee said. “And that finally paid off. But actually, I blinked and then I just heard [people] screaming. When I watched the clip later, I regretted that I got hit by the ball trying to avoid it. Because it didn’t hurt that much.”

Along with his unique goal is his unique relationship with some of the K League’s rookies. Between Lee and Lee Soo-bin, who joined Jeonbuk through a loan from Pohang, there is a 21-year age gap. Although they’re teammates, Lee Soo-bin is the same age as Lee Dong-gook’s nephew.

Lee will also be seeing his former national squad teammates this season, but this time they will be the opposing team’s managers.

From this year, former players Kim Nam-il will head Seongnam FC while Seol Ki-hyeon will take the helm at Gyeongnam FC.

“Since they’re both very thoughtful, I’m sure they’ll make [the clubs] into great teams,” Lee said. “It’ll be fun to watch their performance as managers.”

Though Lee is only a year or two younger than Seol and Kim, he thinks it will take him a lot longer to be in their positions, but that when the time comes, he’ll have a lot to offer.

“I’ve spent a lot of time as a professional player, and since I had a lot of ups and downs, if I become a manager, I think I’ll have a lot of stories to tell [my players].”

This season, Jeonbuk has also strengthened their squad, in a bid to realize their goal of a third consecutive K League 1 title, by signing Kim Bo-kyung and Takahiro Kunimoto. With the addition of the two, Lee may not be playing as much but will still be leading the team as he was once again given the role of the club’s captain.

“Kunimoto is really good with his creative playing,” Lee said. “In the center, we have a lot of players, like Kim Bo-kyung, who make great passes. This year, we are focusing on the AFC Champions League. I want to score 10 goals or more in the league, too.”

While Lee is the oldest active player in the K League 1, looking at the other leagues, he is still comparatively young. In Japan, the J1 League’s Yokohama FC’s Kazuyoshi Miura will be turning 53 this month.

“I don’t want to play in my 50s like Miura,” Lee said. “I’m only going to play until the moment when the manager wants me in the matches and when I feel that I can change the flow of the match, myself.”