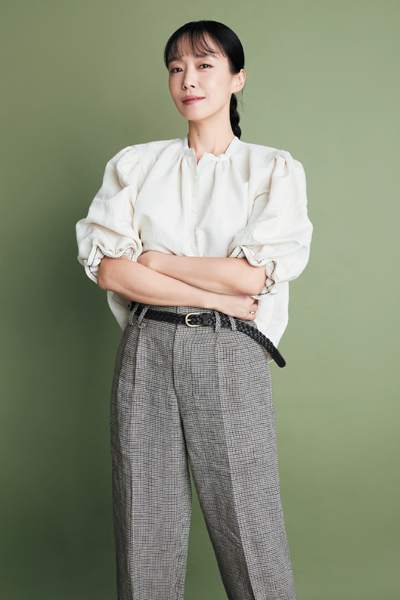 Almost 30 years into her career, actor Jeon Do-yeon has finally been given a chance to play a character who’s evil not because of her heartbreaking past but because she is truly evil at her core.

“Beasts Clawing at Straws” is a 108-minute film slated to hit theaters on Wednesday featuring Jeon, Jung Woo-sung, Yoon Yeo-jeong, Shin Hyun-been and Jung Ga-ram, who each show different - yet similarly ugly - sides of themselves in a desperate chase for a bag full of cash. Jeon transformed herself into Yeon-hee, a sociopath determined to change her life by erasing all traces of her past. She may not appear on screen until 50 minutes into the film, but she easily overwhelms the audience with her charisma.

“Usually with characters, I think about how they would have been in the past, before the scenes in the movie,” Jeon said. “But with Yeon-hee, I didn’t have to project anything onto her because it felt like everything she did was exactly like what she would have done in the past.”

Jeon met with the Korea JoongAng Daily ahead of the film’s release at a cafe in Samcheong-dong, central Seoul. “Beasts” was initially scheduled to premiere on Feb. 12 but was postponed due to the coronavirus outbreak. The R-rated crime thriller is the first feature film from director Kim Yong-hoon.

Jeon said that the experience of playing Yeon-hee was actually more refreshing than difficult.

“The sociopathic sides of Yeon-hee were just so interesting and fun,” she said.

“The Yeon-hee now is the same Yeon-hee as she was in the past. It felt so liberating to play a character who doesn’t have a long history. When I read the script, Yeon-hee was just built so perfectly that I didn’t need to make anything more out of her. It felt so simple, and I told myself that I should play her simply.”

Although the plot itself, in which people from different walks of life battle over a large cash prize, may not be unheard of, Jeon says that the way the story unfolds is what makes it unique, in omnibus episodes surrounding one subject. 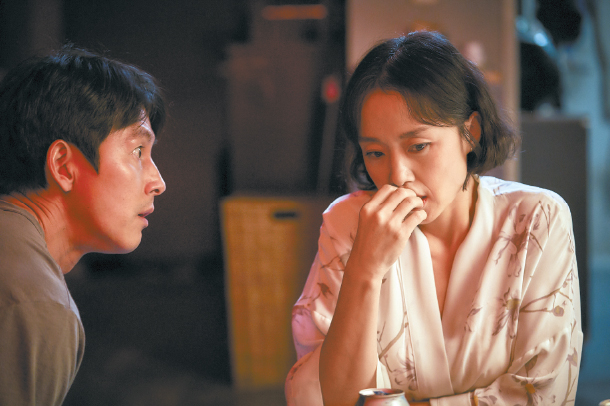 Thriller “Beasts Clawing At Straws” hits theaters this Wednesday. Jeon Do-yeon plays Yeon-hee, right, a purely evil character. She ruins the life of Tae-young, left, played by Jung Woo-sung, after she leaves him with a pile of debt and runs away. [MEGABOX PLUS M]

“When I read the script, I almost felt like I was playing hide and seek,” said Jeon. “I was worried about a lot of things to be honest. Could we cast all these people? When we had them all, could we really start? Could we really put all of the stories of these people into one movie because every character was so important? But I wanted to believe in the director because he was the one who came up with everything.

“But when I started shooting - I join mid-way through the shoot - I found out that the director was really enjoying himself on set. He felt so relaxed that it surprised me. It wouldn’t have been easy, but I felt like he was truly enjoying himself, unlike other rookie directors [I’ve come across].”

Within the film, Yeon-hee has history with Jung Woo-sung’s character Tae-young, a Korea Customs Service worker who finds himself in a struggle with loan sharks because of Yeon-hee. Jung may have been known as a heartthrob in his younger years, but he has also played some of his toughest roles in recent years including a North Korean solider in “Steel Rain” (2017) and a corrupt prosecutor in “The King” (2016). For Jung, playing Tae-young was no walk in the park.

“I was really shook by his portrayal of his trashy character,” she said.

“We needed some time to get used to our relationship as a couple, but the scene that showed that we had a history was so short that we almost had to just push through it. I had a rough idea of how Tae-young would be reading the script, but Jung Woo-sung’s Tae-young almost had me confused. When we got through our first scene, where we were eating and talking, then it worked out. I actually felt like it was a pity that it ended right when the two people’s relationship was just starting to get more fun.”

The fact that Yeon-hee doesn’t appear on screen in the first 50 minutes of the film is also fun, according to Jeon. It makes it “refreshing and different” from other movies that a main character doesn’t appear right away and even when she does, she’s nothing like you expect her to be.

“Not restraining the main character to one single idea is so new I think,” she said.

“I hope that this is a chance for the audience to see a new side of actor Jeon Do-yeon - as someone with more charms than meets the eye. But it was also a chance for me to take a little break because you can’t always push yourself. That just takes the fun away from it. Sometimes you run and run away from a project, but you just end up doing it. At the end of the day, I guess I want to try new things.”

Just as her character doesn’t have a complicated history or background, Jeon was more impressed with how the director didn’t really create a deep underlying message to the audience.

“I really liked the fact that there wasn’t a message or a moral of the story,” Jeon said. “People think they’ll be happy with money. But money’s not the absolute means of happiness. You can be happy with it or without it. It’s about what idea you have that matters.”

This year will mark Jeon’s 30th anniversary as an actor, although her first appearance on screen wasn’t in a drama or movie, but through an advertisement for Johnson & Johnson. When asked how she felt about her long career, her answer was definitely not what was expected.

“I hate it,” she said. “I do think, ‘Wow, I really tried my best.’ I feel proud of myself for having done everything. But even though I did live through that time, not everything went the way I planned it. But I do thank myself.”

With the news of Bong Joon-ho’s “Parasite” becoming Asia’s first Academy Award-winning film, Jeon says that a new chapter for Korean films, and hopefully for herself as well, is about to begin.

“I think [that winning an Oscar] is such a historical feat,” she said. “It’s opened up a new door for everyone, for every actor and director.”