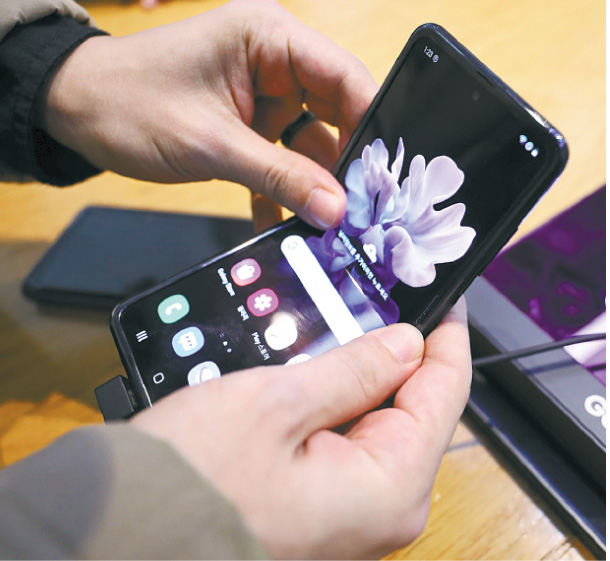 A customer picks up a Samsung Z Flip foldable smartphone at a store in Seocho District, southern Seoul, Friday. [YONHAP]

The Galaxy Z Flip, the second foldable from Samsung Electronics, is out of stock at some stores in its first day on the market.

LG U+, the smallest of the trio, said its first batch was sold out online within 30 minutes of the opening. The company declined to say how many phones it had in inventory in the online shop.

Normally, only a few percent of the total stock will be allocated to the online store, while the rest will be sent to retail locations.

The foldable phone is sold through various retail channels, including Samsung’s website, the Samsung Digital Plaza electronics shop and the mobile carriers themselves.

Market analysts believe that around 20,000 units will be distributed to shops in the first week, ten times the allocation for the Galaxy Fold.

Samsung announced in the launch event earlier this week that the Z Flip comes in three colors - purple, black and gold.

Local telecom providers only carry the purple and black Z Flip, and Samsung has yet to announce where the gold edition will be sold.

The carriers seek to lure consumers with subsidies and free gifts, including televisions and vacuum cleaners. SK Telecom will offer a subsidy of up to 210,000 won, although the amount can vary depending on plan a user chooses. KT will provide a maximum of 153,000 won and LG U+ 175,000 won.

From Feb. 21, a Thom Browne Edition will be made available in collaboration with the fashion brand. It will retail for 2.97 million won.

The Z Flip is only available for LTE networks, not 5G. The Galaxy S20 will be available March 6.