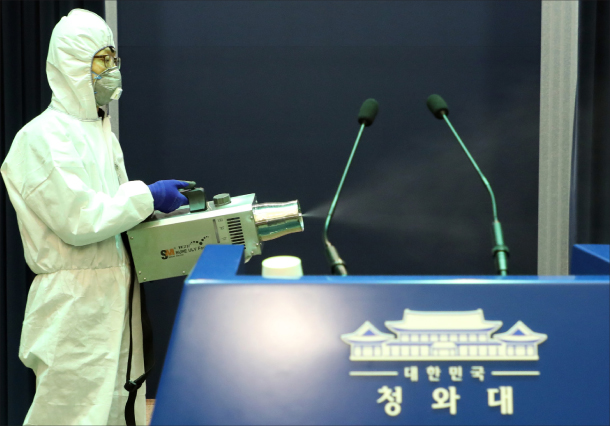 A worker disinfects the press briefing room in the Blue House in Seoul on Friday to prevent the spread of the novel coronavirus. [YONHAP]

South Korea on Friday reported no new novel coronavirus case for the third consecutive day, with the number of cases remaining unchanged at 28, according to health authorities.

The Korea Centers for Disease Control and Prevention (KCDC) said a total of seven patients have been released from hospitals after fully recovering from the novel coronavirus.

Another 21 patients currently being treated for the virus at hospitals are in stable condition, the health agency said. Only one of them is receiving oxygen therapy for pneumonia but is not in critical condition, it added.

The number of people who have tested negative for the virus reached 6,134 as of early Friday, with another 692 undergoing tests for possible infection, the KCDC said.

Local health authorities, however, said it is premature to judge whether a global epidemic is peaking, as the number of cases in mainland China spiked overnight, and they stressed the importance of continued quarantine measures.

“New cases in China increased after Hubei Province revised its method for counting infections,” said Kim Gang-lip, deputy head of the central disaster headquarters. The province, where Wuhan is located, is the epicenter of the coronavirus outbreak.

Health authorities also said a fine of up to 3 million won ($2,530) can be levied on those who have clearly violated protocols regarding self-quarantine, Kim said.

The comments came after reports that the country’s 15th confirmed coronavirus patient dined with a family member three days after he was diagnosed with the virus. The relative later became the 20th confirmed case.

Those who are under self-quarantine are required to eat by themselves and must stay in isolation as much as possible, the KCDC said.

All of the 700 hundred South Korean nationals who were admitted into two quarantine facilities south of Seoul after being evacuated from Wuhan will be released from isolation this weekend as scheduled.

They all tested negative for the virus two consecutive times after staying in temporary accommodation for 14 days, the disease’s incubation period, officials said.

Meanwhile, a 1-year-old national who was evacuated to South Korea on the third chartered flight and is staying at a temporary shelter has shown a mild fever, Kim said. The baby is currently being checked for possible infection.

South Korea has been beefing up its efforts to stem the spread of the virus. Starting Wednesday, strict quarantine screening has been enforced against entrants from Hong Kong and Macao, in addition to mainland China.

Passengers from mainland China, Hong Kong and Macao are now required to use separate arrival counters at international airports across the country and must write a special quarantine report, filling out health questionnaires to check whether they have a fever or respiratory problems.