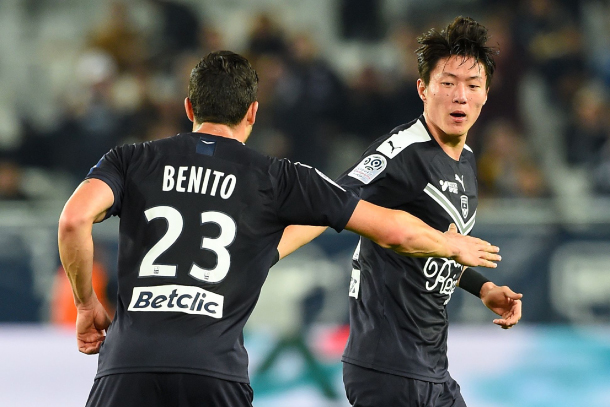 Hwang Ui-jo of FC Girondins de Bordeaux, right, celebrates with his teammate Loris Benito during the French L1 match against Dijon FCO at the Matmut Atlantique Stadium in Bordeaux, France, on Saturday. Hwang scored an equalizer with a header in the 35th minute. Then, Jimmy Briand scored Bordeaux’s second goal to take the lead, but as Mounir Chouiar of Dijon scored another in the 72nd minute, the two teams played to a 2-2 draw. Bordeaux is now ranked ninth in the league with nine wins, eight draws and eight losses, totaling 25 points. It was Hwang’s fifth goal of the season. [AFP/YONHAP]