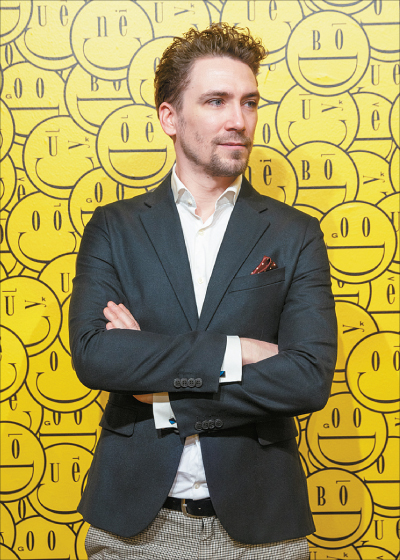 In 2015, Oxford Dictionaries chose its word of the year, but the recipient of the honor was an unusual one as it wasn’t a word that won the honor - it was an emoji, the face of someone crying tears of joy or laughing while crying. It was the first time for non-textual language to be recognized as a means of communication in the digital era, and the moment struck artist kissmiklos with inspiration.

The artist visited Korea to celebrate the opening of his solo exhibition held at the Lotte Gallery inside Lotte Department Store Incheon Terminal branch, which kicked off on Jan. 17 and runs until Feb. 23. Accompanying him was his wife Eszter Sarah Cseh, also an artist, and the photographer behind most of his work. The artist’s name kissmiklos is actually his real name - Kiss Miklos.

The exhibition, which is the first of the new year by Lotte Gallery, is titled “emograms with LOVE.” It embodies the two main subjects of the artist’s work - the yellow smiley faces named “emograms” and the pink love field.

“One of my most important messages is communication with each other and contacting each other,” he told local press. “All over the world, we use emojis and emoticons and they always mean the same thing. I thought about how we could transform these emoticons and emojis to real worlds.”

The Hungarian artist - who also works as a designer, architect and branding expert - began his famed “emogram” series in 2015 after seeing the word of the year. The word “emogram” is a compound of emoji and pictogram, which is quite simple when it’s seen in person. The yellow smiley faces, inspired by Harvey Ball’s “Smiley” faces (1963), each have English words as their faces, like lucky, nice, cool and good. For good, the two “o”s are eyes and the “D” is the smiling mouth with “g” next to the left eye. And for cool, the two “o”s are once again the eyes and the “c” is the mouth, and “l” stands above the right eye. 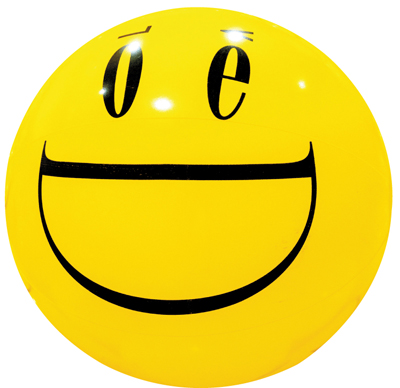 “I really love typography and thinking about how to connect the letters to each other. That’s why I started to make typographical sculptures and made them into ‘emograms,’” he said.

Having studied at the Hungarian Academy of Fine Arts, kissmiklos began his career in the early 2000s, beginning with a Glatz Oszkar Prize in 2002, a Ludwig Prize in 2004, Award of the Hungarian Ministry of Communication and Informatics in 2005 and the Prize of the Best Pavilion at Bibliobraz International Book Fair in Moscow in 2007. His “Goldenroach” series that began in 2011 saw him stop at some of the world’s biggest museums including Tate Britain, Tate Modern, Museum Moderner Kunst Stiftung Ludwig Wien, Centre Pompidou, Louvre, Museum of Modern Art in New York and Kunsthalle in Budapest.

“I work in many fields, from graphic design to branding, packaging, internet design, sometimes architecture and now fine art,” he said. “In all this, I try to smooth the borders between design and art, because I think borders are not important between the arts. That’s why I try to make this kind of artwork where I put the typography into fine arts. I try to make not just artwork but something with a strong philosophy.”

According to the artist-designer-architect, the reason his work is enjoyed by a large audience is due to the popular images he uses, but with the additional layers of deeper concepts and ideas that people of different levels can all enjoy. It comes from “people’s love for secrets and interesting stories,” but ultimately differs to what each person expects to see at an art exhibition. For this exhibition, kissmiklos expects visitors will most likely feel positive emotions. Seven words have been used for “emograms”: lucky, nice, cool, loved, cute, good and bold.

“I always try to add not just one layer to my artwork, but many. The first layer may be the first impression - browsing how the artworks look. But the second layer is deeper and the third is much deeper. I think this is a democratic situation. Some people just want to see something and laugh, but others maybe interested in a deeper meaning. It’s a democratic situation and the contemporary art world is moving this way,” he said.

He added, “Yellow is the color of happiness and it gives a great feeling. Maybe I’ll change it in the future. I don’t know. Why not?”