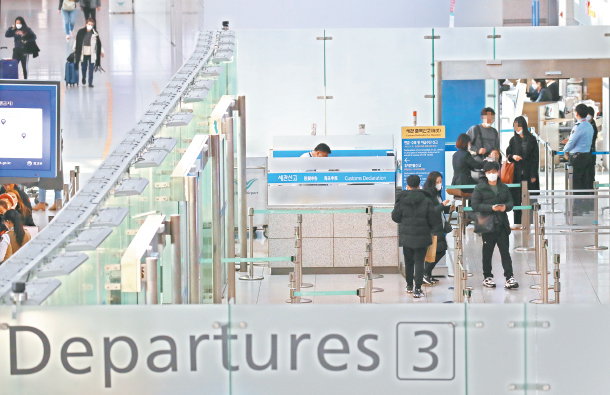 Airport staff and travelers wear protective masks at the Incheon International Airport departure entrance on Feb. 11. Fears driven by the spread of the Wuhan coronavirus have heavily affected the tourism industry. [YONHAP]

The recent outbreak of a new coronavirus has reduced demand in the film, travel, and transportation industries according to findings published Thursday by the big-data analysis company IGAWorks.

The report is based on data from an average of 35 million Android devices per day. The company used a mobile index to study the growth of app users per industry in the first week of February, compared to the average weekly users in January.

The film industry was impacted the most. 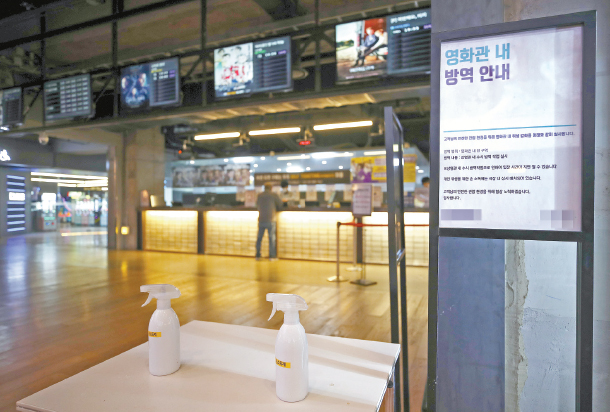 A movie theater erects a notice regarding quarantines, while the lounge is absent of moviegoers. The movie industry has also been affected by the virus outbreak. [YONHAP]

Conversely, apps focused on e-commerce and food experienced an increase in users, according to the report.

Meanwhile, Plague Inc., a mobile role-playing game in which the player fights with a deadly plague, has seen its number of users grow since Jan. 20 when the first confirmed patient of the new coronavirus was announced in Korea. The number of users increased by a factor of 27.7, from 1,300 in early January to 38,600 by the second week of February.

Coronavirus Map, which provides information on confirmed patients of the new coronavirus worldwide, also recorded 30,000 users in just five days after it was launched on Feb. 1 and reached 45,000 users on Feb. 6.