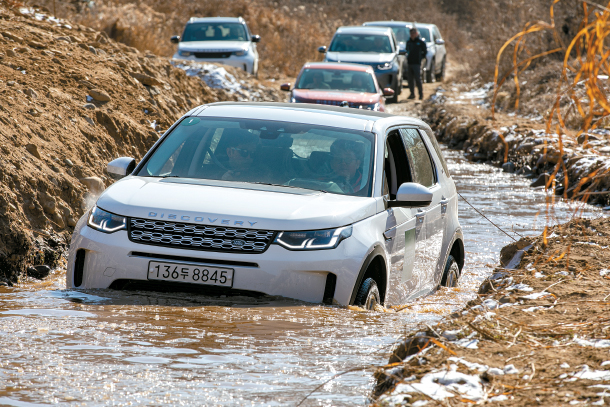 HONGCHEON COUNTY, Gangwon - SUVs are all the rage. That much is clear. But how about an SUV that does what an SUV should - allow you to drive with confidence off-road? If you’re not just a rough-driving poser, the Discovery Sport might be the vehicle for you.

The premium SUV from Land Rover closely hews to the automaker’s philosophy.

Since replacing the Freelander in 2014, Land Rover has sold more than 500,000 Discovery Sports globally, with Korea taking 17,000 of them.

While some owners criticize how much it costs to maintain the car, sales figures definitely show that the Discovery Sport is one of the leaders in the premium mid-size SUV segment.

And the Discovery Sport is back in town. This time, the company is trying to market the vehicle as more of an all-rounder rather than just being an excellent off-road explorer.

The face-lifted Discovery Sport deserves considerable respect, especially as it has many upgrades that address problems criticized by Korean drivers in the past.

But room for improvement remains. As much as the SUV is a standout for off-road driving, it remains an also-ran in more civilized settings.

The SUV itself checks all the boxes in terms of design for the purpose of appealing to a wider range of consumers. While maintaining the core design concept to remind people that the Discovery Sport remained true to its history, it applied a few bold touches across the front to let the world know that the basic concept, which is a good one, is evolving. 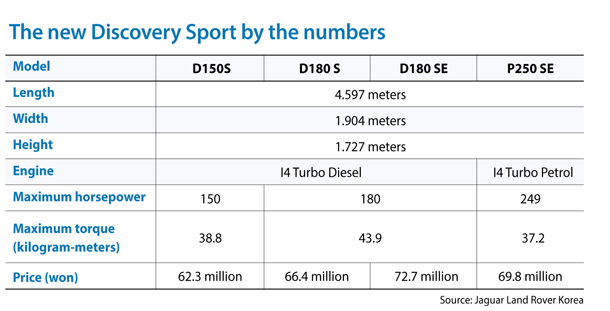 LED headlamps are fancier, and the bumper is sharper on some models. Hexagon patterns are added in the grille, although the overall shape is maintained.

The laggy touchscreen infotainment system of yore was nowhere to be found. Instead, I was treated to a 10.2-inch display that promptly responded to every touch, a huge difference from the original version that required a significant level of patience and self-control.

Yet the upgraded system still utilized the same navigation system, which seems to be having a tough time keeping pace with what is actually happening.

What definitely dashed expectations was the overhaul of the infrastructural architecture beneath the car. Face-lifts usually don’t involve so much effort, but Land Rover put in the extra effort and for a good reason.

As virtually every automaker these days goes electric, Land Rover probably felt the time has come for it, too. The new architecture under the car seats resembles what was done to the Range Rover Evoque - going mildly hybrid.

The latest Discovery Sport has both an engine and an electric motor. A plug-in hybrid offering may come out as well, though it might hit Korea later than elsewhere. A fully electric version may also be in the works.

The new architecture combined with a compact suspension design helped increase the interior size of the new Discovery Sport. It definitely is a vehicle for families, as it has upgraded recline for the backseats and provides more legroom.

Loads of space is available. For the face-lifted edition, the trunk size was expanded to 897 liters (237 gallons), which can be expanded up to 1,794 liters when the backseats are down.

Maybe the new architecture also helped smooth the ride of the new Discovery Sport when I got behind the wheel during a test drive earlier this month in Hongcheon County, Gangwon.

The Discovery Sport D180 SE edition was smooth and rather quiet at all speeds. Despite its large size, the diesel-powered SUV cruised without any notable bumps or jumps.

The Sport name suggests exhilaration, responsive acceleration and that telltale “vroom,” but the Discovery Sport had none of that.

It is sporty by name, but more geared towards comfort. Acceleration takes time.

It certainly performs better than what’s promised on paper, and I couldn’t be too critical of the car’s on-the-road performance during a 40-minute drive.

But how can it have a sport name with only 180 horsepower under the hood. It doesn’t even have a Sports mode.

The British SUV did perform well on an off-road course, exhibiting all the traits one would expect from the Rover tradition.

With six driving modes for different terrains, the Discovery Sport made navigating bumpy hills, sandy curves and muddy puddles as fun and safe as it could be.

There is also a terrain response system that automatically matches the driving mode to the lay of the land, which I, a lazy reviewer, used most of the time during the off-road course.

The vehicle lived up to the Jaguar Land Rover Korea marketing material. It’s the right vehicle for those who want to get off the road and into the sticks. While the car may not be for Autobahn, it certainly is the one for the back country.

At one point during the off-road course, the car was wading through a 50-centimeter-deep puddle with almost a third of the body underwater, and nothing came through the doors even though the car didn’t look so fancy after the 30-second swim. It made me wonder why Land Rover didn’t market the SUV as an amphibious vehicle.

Hang around Gangnam and you might see more than a dozen Land Rover Discovery Sports in just 10 minutes. The signature British SUV is certainly popular with Korean consumers.

With the launch of the face-lifted version with overhauled architecture, an intuitive infotainment system and enhanced convenience, demand could indeed be stronger.

And if you are the type who likes to get into the mud and get some air under the vehicle for an authentic off-road experience, the Discovery Sport might be your ride of choice.

But remember, that the Sport is not so sporty.