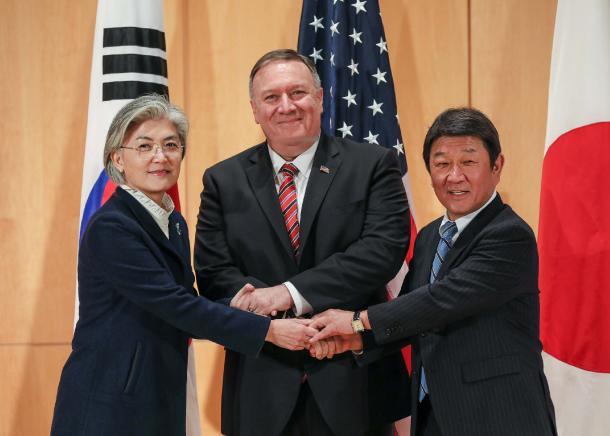 South Korean Foreign Minister Kang Kyung-wha held talks with her U.S. and Japanese counterparts in Germany on Saturday to tackle an array of bilateral and global issues including the stalled denuclearization talks with North Korea and the situation in the Middle East.

Kang also pledged to work toward combating the new coronavirus in talks with Chinese Foreign Minister Wang Yi later that day on the sidelines of the annual Munich Security Conference which ran through Sunday.

In their second trilateral meeting this year, Kang, U.S. Secretary of State Mike Pompeo and Japanese Foreign Minister Toshimitsu Motegi discussed “how the three countries can cooperate on the North Korea denuclearization issue,” according to the South Korean Ministry of Foreign Affairs. The three envoys held “in-depth discussions” on how to cooperate on the North Korea situation in the future amid a standstill in denuclearization talks since the second North Korea-U.S. summit in Hanoi, Vietnam, in late February 2019.

They also discussed how to cooperate on global issues including the novel coronavirus outbreak which originated in Wuhan, China, and the situation in the Middle East.

This marked the seventh trilateral meeting since Kang took post as Seoul’s top diplomat in 2017. The three envoys last met just one month ago in San Francisco on Jan. 14 at the height of tensions in the Middle East following the U.S. air strike killing top Iranian commander Qassim Suleimani and as Seoul mulled over deploying troops to support the U.S. coalition in the Strait of Hormuz.

On a lighter note, Pompeo before the start of trilateral talks congratulated Kang over Korean film “Parasite,” directed by Bong Joon-ho, winning four Oscars including Best Picture, according to a Seoul official.

The U.S. State Department likewise said in a statement that the three diplomats “reaffirmed close cooperation” on the North Korea situation and “discussed a coordinated response to the coronavirus outbreak and other global security concerns.”

It added that they also “emphasized the importance” of the South Korea-U.S. and U.S.-Japan alliances “to security and prosperity as a key part of the Indo-Pacific strategy, adding further that trilateral cooperation is essential to ensuring stability and peace in the region.”

Pompeo made brief mentions of Pyongyang during his speech at the security forum Saturday, noting the economic development differences between the two Koreas, calling “South Korea, that light-studded map with North Korea in complete darkness.”

He said that the United States “has worked with international sanctions, global sanctions, to prevent North Korea from continuing to develop its nuclear weapons program” and has “worked to bring Pyongyang consistently back to the negotiating table.”

A South Korean Foreign Ministry official said on the sidelines of the forum, “In a situation where North Korea has been isolating itself and cutting off outside exchanges amid the new coronavirus outbreak, there has been a consensus that North Korea will not immediately conduct any large provocations.”

Kang held separate “pull-aside” talks with Pompeo, and the two agreed to “continue efforts to amicably resolve alliance issues” including the bilateral defense cost-sharing agreement, according to the Foreign Ministry, and strengthen the bilateral alliance, calling it the “linchpin” of stability in the Asia-Pacific region.

Seoul and Washington are currently negotiating renewing their bilateral Special Measures Agreement on the cost of stationing U.S. troops in Korea, after their previous one-year deal expired at the end of December.

Kang also held bilateral talks with Motegi amid an ongoing spat over trade and historical issues between South Korea and Japan.

During their talks, Kang again requested Japan to speedily withdraw its export restrictions, implemented since July last year, and stressed the need for Tokyo to take more “visible and sincere measures,” according to her ministry in a statement.

Tokyo has protested against the Korean Supreme Court rulings in 2018 ordering Japanese companies to compensate victims of forced labor during World War II, saying the issue has been resolved in a 1965 treaty normalize bilateral relations. Since last summer, Japan has implemented export restrictions and removed Korea from its so-called white list of trusted trading partners. In turn, Seoul in August announced it will terminate its General Security of Military Information Agreement (Gsomia) with Tokyo - a move fiercely protested by Washington who sees the bilateral pact as being symbolic of trilateral security cooperation. Korea agreed to “conditionally” keep the Gsomia pact in November for the time being to give room for negotiations to take place to resolve their differences but has said it can always be scrapped.

The Gsomia issue wasn’t said to have come up during the foreign ministerial talks.

Kang and Wang also agreed to continue to work toward a visit to Seoul by Chinese President Xi Jinping in the first half of this year, as agreed upon in a summit between President Moon Jae-in and Xi in Beijing last December. This marked Kang’s 10th talk with Wang.

Kang also requested for China’s participation in the Partnering for Green Growth and the Global Goals 2030, or P4G, summit, set to be held in Seoul in June, and Wang agreed to “sincerely review” the matter.

Kang also asked during bilateral talks with countries including Canada, Finland, Norway, Denmark and Spain for their support and participation in the upcoming P4G summit.