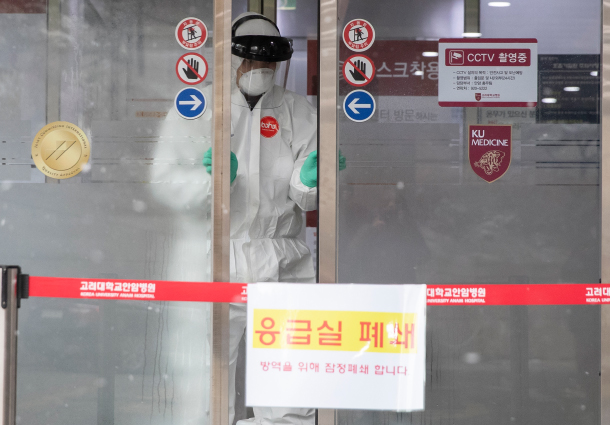 Quarantine officials shut down the emergency room of Korea University Anam Hospital in central Seoul on Sunday and disinfect the medical facility after Patient No. 29 was confirmed to be infected with the novel coronavirus after visiting the emergency room. [YONHAP]

The Korea Centers for Disease Control and Prevention (KCDC) said Patient No. 29, a resident of Jongno District in central Seoul with a pre-existing heart condition, tested positive for the new coronavirus Sunday morning. Patient No. 29 has been confirmed not to have traveled outside of Korea in recent months, nor had contact with any known coronavirus patients, meaning how he contracted the virus is still unclear.

Doctors there checked the patient for heart attack symptoms and in the process of taking X-rays found that he had pneumonia symptoms and immediately conducted tests for the coronavirus. After testing positive for the virus, he was transferred to Seoul National University Hospital in central Seoul, one of the state-designated medical facilities to treat the virus, early Sunday.

Patient No. 29, despite having a fever and pneumonia symptoms, is in stable condition and currently receiving treatment at Seoul National University Hospital, according to the KCDC Sunday afternoon. His condition is not severe enough for oxygen therapy, said the KCDC.

The KCDC said it is in the process of tracing everybody that Patient No. 29 came into contact with through CCTV, firstly to monitor who may have been exposed to the virus and also to figure out how he contracted it amid fears of secondary and tertiary infections. There have been concerns that his case is outside the government’s current monitoring system, which currently tracks those who contracted the virus overseas or came into contact with a confirmed patient.

The last new coronavirus case was confirmed Tuesday, after Patient No. 28, a 30-year-old Chinese woman from Wuhan, Hubei Province in China, tested positive for the virus on Monday.

Jung Eun-kyeong, head of the KCDC, said Sunday that the government is considering testing all pneumonia patients for the virus.

Korea has tested a total of 7,890 people for the virus since Jan. 3, with 7,313 testing negative and 577 awaiting results, according the KCDC.

The ninth patient has been confirmed ready to be released. The rest of the patients are generally in stable conditions. Of the 28 previous cases, there were 15 men and 13 women, according to the KCDC, of which 22 were Koreans and six were Chinese nationals. Of these patients, 16 contracted the virus outside Korea and 10 in the country.

The average incubation period for patients domestically infected was 4.1 days, it added, and there have been no cases so far of human-to-human transmission from asymptomatic patients.

Over the weekend, the first and second batch of Koreans airlifted from the epicenter of the coronavirus outbreak in Wuhan was released after two weeks of quarantine at state-run facilities.

A total of 701 Koreans were airlifted from Wuhan on two chartered flights and arrived in Korea on Jan. 31 and Feb. 1. The first group of evacuees spent 14 days, the incubation period for the virus, at the National Human Resources Development Institute in Jincheon County, North Chungcheong, and was released on Saturday after testing negative for the virus.

The second group that had been in isolation at the Police Human Resources Development Institute in Asan, South Chungcheong, also returned home on Sunday.

They left the facilities on dozens of government-chartered buses and returned to their homes or temporary residences in Korea.

Unlike the initial frosty response when residents discovered that evacuees from Wuhan would be quarantined in their neighborhoods, civic groups and locals in Jincheon and Asan took to the streets to see off the temporary sojourners with signs and banners congratulating their release Saturday and Sunday.